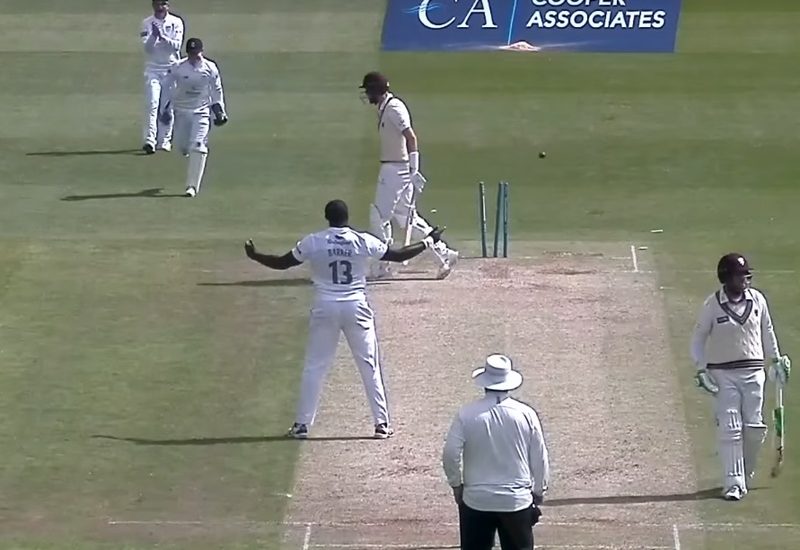 It is hard to think of a bowler better tailored to the the high workloads and nibbly conditions of the County Championship than Hampshire’s Keith Barker. Hampshire’s Mohammad Abbas maybe.

We’ve reached the point in the season where we’ll drop our coverage of the County Championship like a hot Le Creuset pan inexplicably grasped with bare hands. Test cricket will take precedence and most of our attention from now until September.

We take our leave at a jaw-droppingly comprehensible juncture as the 10 teams of the first division finally arrive on the same number of games played for the very first time.

Surrey’s zero point week didn’t prove too costly and they remain top, but it’s Hampshire who’ve been the most interesting side to our mind over the first three-sevenths of the competition – they have more wins than anyone.

It’s a thing we’ve been thinking about since the start of April: Hampshire’s bowling attack is better geared towards the day-after-day teasing of Championship cricket than any other side’s.

Fast bowlers get tired. Spinners aren’t always in the game. If you want the single most appropriate egg receptacle, then the steady, accurate seamer basket is the one to go for. Pile everything in there.

Last week Hampshire near enough won by an innings after only making 280, chasing down the one run needed for victory without losing a wicket.

Somerset were dispatched for 211 in their first innings before being bowled out for 69 (dudes!) in their second. Keith Barker took 6-27, while Mohammad Abbas didn’t do any harm to his average by taking 2-11.

Barker has 27 wickets at 16.74 so far this season. Abbas has 26 at 16.31. Kyle Abbott’s main job is to get the breakthroughs whenever this torrential downpour of wickets occasionally abates. So far he has 19 at 25.11.

Hampshire’s fortunes will greatly depend on their continued ability to field these three eggs. To wilfully mix metaphors, none is a spring chicken, yet they all appear to have emerged from the biggest non-stop block of Championship cricket pretty much unscathed, which surely bodes well.

First-class matches come thinner and slower now until a trio of fixtures in July and then the final tidy-up in September. It’ll be interesting to see what we miss.

This is what the King Cricket email’s about, if you don’t already know.