It seemed like an excellent plan when the idea was hatched.  In the absence of first class cricket between Middlesex and Essex for the foreseeable future, Charley “The Gent” Malloy and I would take in a day of second XI cricket between our two teams.  As luck would have it, the day that suited me and Charley for this cricketing purpose also suited Daisy and Mrs Malloy for an evening meal at the Daisy House. Charley and Mrs Malloy had still not seen the house, although Daisy has now been in situ there for nearly three years. The Malloys were especially keen to see the garden.

The only problem with that superb plan was, of course, the English weather. As the appointed day approached, the forecast got worse and worse. Indeed, the night before the event, I wrote to Charley saying, “not even my relentless cricket-watching optimism imagines that we’ll get to see any cricket tomorrow. Let’s take stock in the morning just in case, but I’m going to spend the rest of this evening building an ark and guess that I’ll see you tomorrow evening at the house!”

It was pouring down when I woke up on the day and the forecast suggested that it would pretty much rain all day. I did a bit of work and sorted out some of those domestic things I never normally quite get around to sorting out unless/until they are emergencies. Naturally, just before I set off for the house in the early evening, the rain stopped and the sun even started to peep through.

At least the better evening weather enabled us to show Charley and Mrs Malloy the garden in the sunshine.  In preparation for the day at Radlett, Charley had bought a cricketing gingerbread man, which we admired for its aesthetic but all decided not to eat. 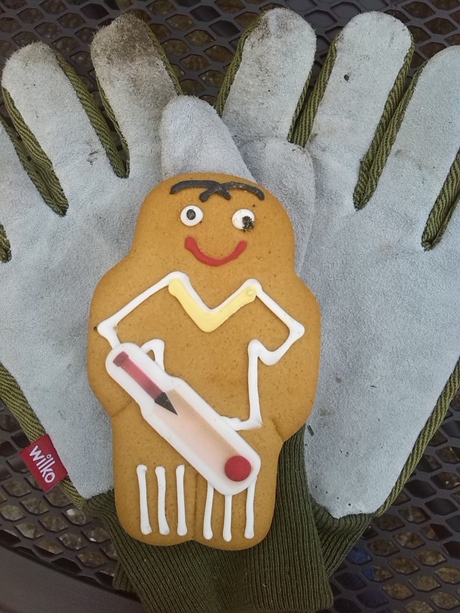 After dinner, I played my baritone ukulele. Charley and Mrs Malloy listened like aficionados at a music concert – a little unnerving given the novelty of my hobby and my general lack of dexterity. “You don’t move your fingers quite as much as, for example, Albert Lee did at the concert we went to the other week”, said Charley. “Shhh, Charley”, said Mrs Malloy, who then joined in when I sang I Guess It Doesn’t Matter Any More. Charley stifled his coughing a couple of times and I saw tears welling up in his eyes at the sound of Leonard Cohen’s Suzanne and Neil Young’s Out On The Weekend.

Then Charley said: “I read a review of the latest Neil Young album the other day; it said that Young now sounds like an old man in a retirement home singing to himself before medication time.” I took that comparative comment as a great compliment.