I had been invited to a 30th anniversary reunion at school for this day. The thought of a formal school reunion horrified me, so I arranged to be at cricket during the day and at the theatre in the evening, to ensure my unavailability.

I had met up with some of the old school crowd, informally, a few weeks before. They felt they needed a rehersal. I took a couple of mementoes with me that day – my slide rule and a pair of old sports socks, on the outside of which my mum had sewn a name tag. I also promised to digitise and submit the old black and white photos I used to take at school. Most of them on subsequent inspection were gash, but the following picture wasn’t bad, especially considering I took it with a Zenith B. 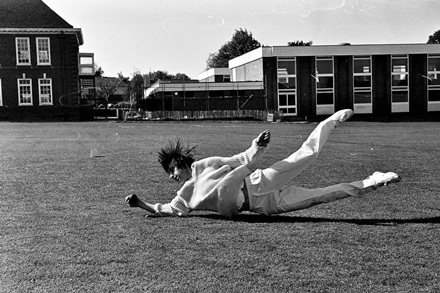 As the temperature forecast for the day deteriorated, I kept dropping hints to Daisy that she should make sure she had plenty of warm clothing with her. On the morning itself I packed my thermal vest and again implored Daisy to wrap up warm. Daisy has previous in this department, but she swore she had plenty of layers.

There was something appropriate about skiving off the old school reunion for the cricket. As we entered Lord’s I half expected one of the stewards to feel my collar and ask “why aren’t you in school, young man?”

We went up on the pavilion sun deck and in fact the morning, although chilly, was quite sunny and bearable. But when the sun went in, we were really cold and Daisy reported that, had she known it was going to be “this” cold, she’d have brought some socks. We agreed that I’d buy her some socks when we popped out to get our lunch during the innings break.

St John’s Wood High Street is not the ideal place to find a cheap pair of socks for the sole purpose of one afternoon’s cricket warmth. We tried several sock-free places before ending up in a boutique named Square One which only sold Emporio Armani socks and only in packs of three. £25.50 poorer, I realised that it would have been cheaper and quicker to have hired a taxi to take me home and get those old school numbers with me name tag in them. I also realised that the socks had cost me more than Daisy’s entry ticket for the match.

Still, we had three pairs, so Daisy was able to sport them on her feet and hands (she had also neglected to bring gloves). The photo below is Daisy sporting the resulting Emporio Armani fashion statement. 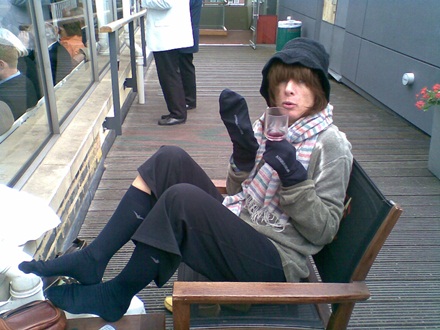 As the temperature dropped further, I went to the gents to don my thermal vest. Horror – I’d need to remove my jacket and tie in the pavilion. I took the risk, thinking that perhaps no-one would come in while I was temporarily breaking the golden rule. But of course one of the more senior gentlemen did enter and looked at me quizzically.

“Thermal vest”, I said, digging myself into a deeper hole. “It’s freezing”.

Later in the day, when the Middlesex Chairman stopped by, I asked him whether there is a dress code rule prohibiting the wearing of socks as gloves on the pavilion sun deck. He replied: “I don’t think there is, but don’t worry, there soon will be”. I didn’t have the courage to mention the thermal vest donning incident and he was too polite to ask “why aren’t you in school, young man?”