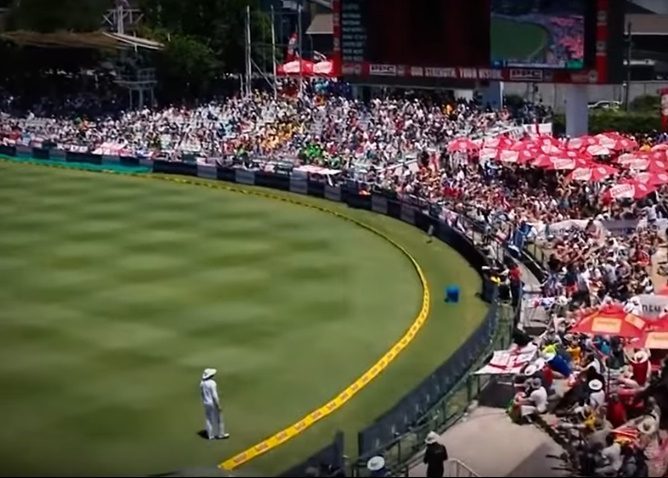 Is Test cricket dying because it’s unsuited to modern life? Or is it being allowed to die because it’s harder to monetise?

Doom-mongering administrators often talk like the world’s moved on from Test cricket. They say no-one’s interested any more and nothing can be done to save the format. They say they’ll do what they can for the patient, but the sad fact is a five-day cricket match doesn’t fit into modern life.

This is misleading and ignorant. The only question is whether or not they know it.

Do you know what a TRP is? Be thankful if you don’t. It is the kind of thing it is better not to know. We’re going to explain what a TRP is in a second, but please try and expunge the meaning from your brain once you’ve finished reading the article because if you ever find yourself talking about TRPs, you’ve definitely taken a wrong turn in life.

A TRP is a ‘target rating point’. It’s a marketing term. It means the percentage of your target audience that you actually reached through a given communication medium.

To justify that position, he said: “If you look at the TRPs of the broadcasters, T20 has the maximum TRP. It is because of being the shorter version of the game. Nowadays, people don’t have five days to watch a Test match. From 10 to 5 everybody has their own job, it is very difficult for them to watch this game. T20s get over in three-and-a-half hours, like watching a movie. Therefore, it is picking up very fast.”

Okay, there’s a few things to pick up on here.

Firstly, and most importantly, “10 to 5” – what the hell is that? Do you honestly think those are standard working hours, Shashank? You’re ICC chairman. How about working a full day for once in your life?

Secondly, “nowadays” – are people really busier these days? People have always worked. People have always had family and friends. If people are busier now, they’re busy wasting all the extra free time that’s been generated by all the millions of labour-saving devices they possess.

Thirdly, the biggest error Manohar’s made here is that he’s equated a format’s popularity with how many people watch it on TV at any given moment during a match. And you know what? That’s completely wrong.

You can see why he thinks this. From Manohar’s perspective the success of the sport is measured by how much money it makes and currently how much money the sport makes pretty much hinges on what TV companies are willing to pay to broadcast it.

There’s an episode of the X-Files that’s about an alien who played baseball for the Roswell Grays in 1947.

Here’s an ad for it.

It’s not an especially good episode – it’s probably even a bad one – but it has a very important moment in it when Mulder’s reading some old scorecards.

“Reading the box scores, Scully. You’d like it,” he says. “It’s like the Pythagorean Theorem for jocks. It distils all the chaos and action of any game in the history of all baseball games into one tiny, perfect, rectangular sequence of numbers.

“I can look at this box and I can recreate exactly what happened on some sunny summer day back in 1947. It’s like the numbers talk to me, they comfort me. They tell me that even though lots of things can change, some things do remain the same. It’s…”

And then Scully says, “Boring,” because most people don’t appreciate the subtleties of the scorecard.

No-one’s measuring the target rating points of old cricket scorecards from 1947, but that doesn’t mean people aren’t still spending time poring over them.

People also spend a hell of a lot of time poring over new scorecards – generally online. This is probably the most fundamental way in which Test cricket is followed these days. Millions of people monitor Test match scorecards. It is just that this is a mode of consumption that is very hard to monetise.

And that’s not all.

All of this non-broadcast consumption applies to all cricket formats these days, but Test cricket lends itself to highlight snippets and general debate far more than the others simply because of its duration. Only a small proportion of a Test match’s total audience will be sitting and passively watching the action at any given moment. Plenty of people are still hooked though – it’s just that each of them has a much lower dollar value attached to them.

You can’t write one of these articles without at some point asking, ‘does cricket exist to make money or does it make money to exist?’ so let’s get that out of the way now. Much as we might like it to be the latter, administrators can’t ignore financial pressures. The best cricketers want to make a decent living and even if every last one of them felt the longest format was the most important, there’d come a tipping point for each of them – no-one’s playing for free.

But let’s be clear: none of this amounts to Test cricket failing to fit into modern life. This is not that at all. This is a failure to monetise a format that fits into modern life perfectly.

Do you know what dot-watching is? Dot-watching’s watching a dot move across a map.

It sounds dull, but when the dots represent the positions of different people and they’re involved in a very long race, it can become weirdly absorbing. It’s a misleading term though because you don’t generally just sit there and watch the dot move.

Dot-watching has become increasingly popular as a way of following endurance events, in particular ultra-distance bike races like the Transcontinental Race, the Tour Divide or GBDuro – races that typically involve riders travelling great distances, carrying all their own stuff.

These kinds of races last days or even weeks. Finishing is an achievement and you’re more likely to get overtaken while sleeping than on the road. Quite often riders are allowed to choose their own routes. In the Transcontinental, for example, these route decisions might see them travel through entirely different countries. Rider A might take the direct route over a mountain range, while Rider B might skirt round and go through the foothills.

This means that if you’re following the race, there’s a lot to ponder. You check the map, you see who’s stationary and who’s moving. You compare recent speeds, you look at terrain – and then you get into all their social media stuff.

An ultra-distance bike race is a series of stories. The dots are the starting point and then you delve in as deeply as you want to. As a sport, it’s fascinating, but you absolutely do not sit and watch it. You couldn’t – it’s literally an endurance challenge.

Test cricket is not like this. There are endurance elements, but the play itself is a lot more inherently watchable than a person endlessly pedalling a bicycle. There are similarities though.

There’s this idea that everything in the modern world has to be instant and fast. What many people don’t seem to realise is that you can instantly and quickly monitor slow-paced things.

Most cricket broadcasters have apps these days and some are a lot better than others. We’re slow on these things, so the first time we really got a sense of what was happening was during the 2017/18 Ashes Down Under when we got free access to BT Sport’s offering through our phone contract.

The BT app seemed like a good one. We’d wake up in the morning and the app would have the whole day’s play on it with boundaries and wickets tagged in the timeline. We’d slide around, watching whatever took our interest. We’d catch up with the match interactively, in our own way. Then maybe we’d read an article elsewhere, or see what people were arguing about on Twitter.

You can do a lot more than this nowadays. With apps like CricViz, you can delve deeper into the scorecard. You can investigate how much the ball has been swinging and seaming. You can see how accurate the bowlers have been or get a sense of how many false shots the batsmen have played.

Follow a game this way and Test cricket doesn’t feel slow and unsuited to modern lifestyles: it feels immediate and brilliantly adaptable. You have access to as much or as little information as you want.

At the exact same time, Test cricket can be an ambient thing, something you dip in and out of. You can keep track of the score at work; you can follow it ball-by-ball on your phone on the bus; you can half watch it and half not-watch it on the TV, looking up only when you hear a noise to watch the replay.

The only people who really, really absolutely have to devote great slabs of time to actively watching cricket are the people who are new to the game. While many of us can hear a radio commentator say that a full-pitched away-swinger’s been driven through the covers for four and instantly visualise it, if you’re new to cricket then that description is just a near-meaningless series of sounds. You learn the game by playing it and watching it and building all of that specific knowledge.

If you’ve already made that investment, Test cricket is perfect for a reduced attention span. You can talk over it. You can keep tabs on it in the pub. You can prat about on Facebook or scour Rightmove while it’s on in the background at home. Almost anything you’re doing, Test cricket can creep in and lurk alongside you, giving you a nudge whenever something significant happens.

Modern technology means that you can carry the story of a Test match with you wherever you go. You can keep track of developments almost effortlessly and then, when time allows, you can get instant gratification. You can arrive in the middle of a Test and gain access to two days’ of footage and data – you can actively catch up.

You don’t need patience. You don’t. You absolutely don’t. Test cricket can be instant and immediate but also deeply absorbing in a way few other forms of entertainment can.

Whenever anyone says that Test cricket doesn’t fit into modern life, ask yourself what they really mean.