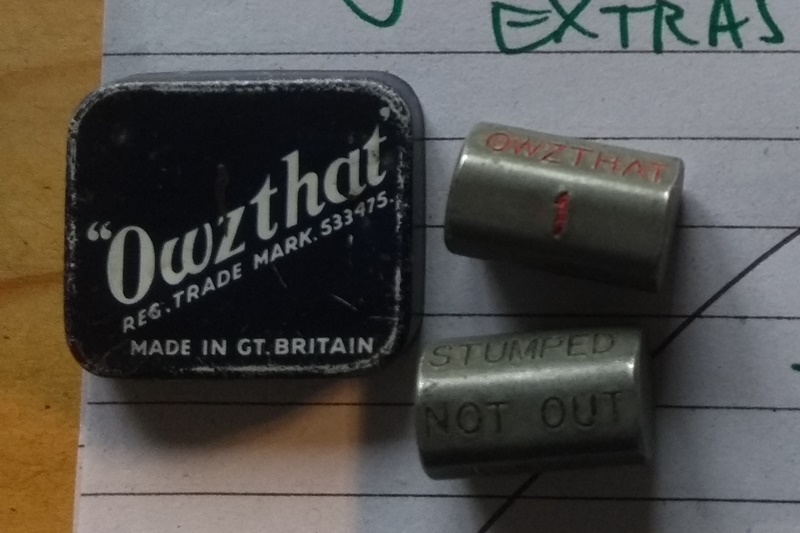 2021. Another new format bringing together 5-a-side, American baseball’s double header and the greatest of all tabletop cricket games: Owzthat. Has the ECB gone mad? Will it appeal to a new audience? How will traditional fans react?

In the unlikely event that you haven’t heard of Owzthat, the batter rolls a hexagonal cylinder, scoring runs until it lands on “Owzthat”. The bowler then uses the other cylinder which will show the umpire’s decision. It combines the tension of Russian Roulette with cricket.

The scorecards have been redacted for safeguarding reasons as the teams included members of Whalley Range U10s.

In the first game, Stokes cracked a couple of sixes but then a sensational hat trick brought Sponge Bob to the crease. He sped to a rapid 27 before his snail sidekick Gary smashed 44 to give Luca’s V something to roll at, the score adjusted down to 83 from the original calculation of 713 (an extra mark if you can show the working that produced that total).

Dad’s V were sitting pretty at 71 for 2 after Jimmy Anderson’s blistering 49. But a clatter of wickets saw last man Billy Whizz needing five. A four brought the scores level before another boundary sealed the win.

In the second game, Dad’s V won the toss and batted. Anderson and Unnamed U10 Player made a great start. Whizz, promoted up the order, added 71 before Root, reprieved by the umpire three times, put his team in an unassailable position. Dad’s V batted on, applying Steve Waugh’s mental disintegration strategy, although Teen Titans Go!’s Raven failed again.

Facing a mammoth 226, Luca’s V were in the game at 133-2 but Buttler and Sponge Bob fell leaving Gary the snail with too much to do.