The latest instalment of ‘seemingly random screengrabs from ECB videos’ brings us Chris Tremlett busting out of a black shirt and Jonathan Trott either fed up with his cold, pondering his own mortality or drifting off into a coma or something.

Just look at the strain on those poor buttons. Chris Tremlett is no longer suited to human clothing. 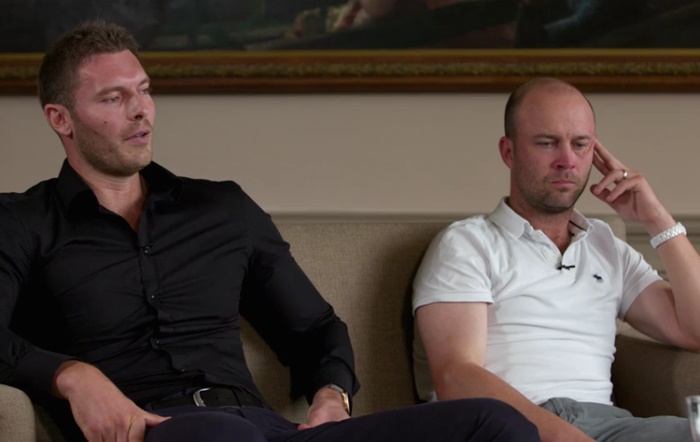 We’ve no idea if this is the kind of thing the ECB are hoping to get out of their social media ‘presence’.

It’s from a nice little thing about the 2010/11 Ashes that also involves Mike Atherton and Matt Prior.

England drop a giant and select AN EVEN MORE TERRIFYING GIANT

We’ve already done ‘Chris Tremlett’s back‘ once before. We’d hate to repeat ourself.

England have dropped the grossly-overtall Steven Finn and have replaced him with a man of similar height but who also has arms the size of thighs hanging off the sides of some sort of oil-tanker-cum-torso. Then there’s the mouth. Tremlett could definitely have a damn good go at swallowing you whole.

When a snake gets really ambitious with a mouthful and gets an animal lodged halfway in, it coughs up its windpipe to use as a kind of built-in snorkel. We have no doubt whatsoever that Chris Tremlett also has this facility. He is only prevented from using it by his conscience and the ancient code of the giants, which specifies that their kind may only harm humans through seaming deliveries which lift sharply off a good length.

Monty Panesar and James Taylor are also in England’s squad, but eating humans whole isn’t even an option for them. Taylor isn’t even human-sized himself. Take a look at this picture and this picture if you don’t believe us.

Chris Tremlett should open the bowling for England

Lots of people have said this, saying Tremlett is more consistent than Stuart Broad and pitches the ball further up. Those things are true, but our point is much simpler: Just look at him. Chris Tremlett is terrifying.

It actually doesn’t much matter that he rarely tops 85mph. If you were a batsman, you simply wouldn’t believe the speed gun. You’d spend half your time at the crease trying to set aside the nagging thought that Chris Tremlett was about to eat you.

Time spent suppressing that fear is time that isn’t spent thinking about batting. Have you ever seen a Himalayan blue sheep execute a textbook forward defensive while being pursued by a snow leopard?

No, you haven’t. We rest our case.

We’re generally in favour. Not because he had a good season in that netherland, the second division of the County Championship, but because when he’s bowled for England, he’s bowled a bit like Andy Caddick and Andy Caddick was mint.