Okay, your job’s pretty rubbish, but at least you’re not South Africa captain during a World Cup

END_OF_DOCUMENT_TOKEN_TO_BE_REPLACED

AB de Villiers has stood down as South Africa Test captain. Faf du Plessis has filled the void, much as he has been doing for quite a while now.

This decision makes sense to us for two reasons. Firstly, de Villiers hardly ever plays cricket for South Africa at the minute, while du Plessis does. Secondly, de Villiers is a bad captain, whereas du Plessis seems quite a good one.

They’ve emphasised the first reason in the announcement.

De Villiers always seemed to look upon captaincy much as a schoolboy does, for some reason equating hand-eye co-ordination with aptitude for strategic thinking and man management.

Whether he has actually been disabused of the notion that he should captain his country because he is the best batsman is unclear. Like many skilful cricketers, we suspect he’ll always believe that his physical ability will directly translate into more cerebral activities connected with the sport. A career as a commentator surely awaits.

How to dismiss Faf du Plessis – make friends with him

Faf du Plessis is a competitor. That’s the kind of thing people say. It’s a shorthand way of saying that he only seems capable of playing to his full potential when there’s a stronger taste of conflict to proceedings.

Performing in what is never called the crucible of county cricket, du Plessis didn’t really make any runs. Quite often he fails to do so in Tests too.

Then there are the good days, when he looks cut from a different cloth. Nothing silky. It would be some sort of high quality durable fabric, possibly with water repellent properties and a rough finish.

Psyched up for his Test debut, he made 110 not out off 376 balls to earn South Africa a draw after they’d been 45-4. Today, having spent the week being harangued for being a ‘guilty‘ man, he made a hundred in a day-night Test when everyone else struggled.

This particular adrenaline-sharpened form of Faf didn’t even get hit in the nads. 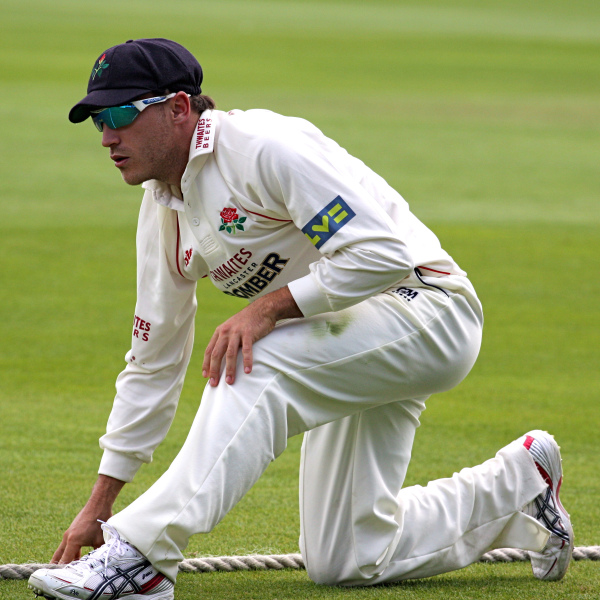 Two other willow-wielders have been fixtures in the side in that period – JP Duminy and Faf du Plessis.

Quite often a young batsman who bowls a bit will rise up the order from number six or seven, ditching the bowling in the process. JP Duminy seems to have achieved the opposite. A promising batsman once upon a time, he has since transformed into a specialist number seven who turns his arm over semi-regularly.

Chipping in and filling a niche for the team is all well and good, but it is seven years since Duminy made his Test debut. South Africa would have hoped for some solidity from him by now.

Then there’s Faf du Plessis. It went largely unnoticed, but he did actually make 86 in the Cape Town runfest. There haven’t been too many other fifties in recent times. As with Duminy, just when South Africa need most from him, he’s delivering the least.

Once upon a time…

Faf du Plessis played for Lancashire. They signed him in 2008 as a Kolpak player and he played for two seasons. He was billed as being one of South Africa’s future stars. As we remember it, he was pretty crap and we were therefore greatly surprised when he subsequently took to Test cricket like a doped Russian to athletics.

Du Plessis had played for Todmorden in the Lancashire leagues in 2007, so he knew the conditions. Despite that, he averaged 25 in his first year of county cricket.

To be fair to him, it was a low-scoring year for Lancashire, although Mohammad Yousuf swanned in, made an unbeaten double hundred and swanned off again to show him how the overseas star thing was supposed to be done. Paul Horton made three hundreds. Du Plessis made none.

In 2009, more runs were made in general, but du Plessis still only averaged 31 and still didn’t make a hundred. For context, team-mate VVS Laxman made four hundreds and averaged 65. Another non-local, Ashwell Prince, averaged over 50.

People were quite forgiving and this may have been because du Plessis was billed as ‘a package’. This wasn’t  another way of calling him a cock, it was a way of saying he was a great fielder and also bowled a bit – leg-spin as well, for which people will always extend initial generosity.

So why is this relevant?

We’re not sure it is. It was a long time ago and players develop and improve – we just wonder whether there’s been a certain reversion to the mean going on with du Plessis of late.

At the start of 2015, he was averaging over 50 in Test cricket with four hundreds to his name. Now, early in 2016, he averages 41 with the same four hundreds. If England can thank R Ashwin and Ravindra Jadeja for precipitating his run of poor form (as well as those of other South African batsmen), then it’s also true that he hasn’t particularly bounced back as a better player might have done.

Basically, what we’ve taken nigh-on 600 words to say is that du Plessis seems more of an averaging 40 type of player than an averaging 50 type of player and while he’s one of the senior players letting South Africa down in this series, maybe he’s not actually quite as good as people thought he was.

Aside from batting all day at one run an over to save Test matches, Faf du Plessis’s other thing is getting hit in the balls. You might say that he’s a specialist.

In the video below, he talks you through the countermeasures he has been forced to take. Here’s a link to the video as well because we’re 95 per cent certain that it won’t show up for email subscribers.

We can thank Faf du Plessis for inadvertently giving us the fantastically earnest Cricinfo headline: ‘No zips on cricket kit by 2015’. This brave new world is to be created because he was caught raking the ball across a zip on his kecks, presumably in a bid to rough it up.

Well aware that cricket treats ball tamperers like war criminals, Faf has gone to the trouble of making some vague comments about the matter.

His first line of defence is:

“When the on-field umpires inspected the ball, there wasn’t a scratch mark or anything untoward on the ball. In fact, it was in excellent shape and wasn’t reverse-swinging at all. Basically, the condition of the ball hadn’t been changed, and that’s why I think my penalty was not as harsh as the sentences given out for other similar incidents.”

This says to us that he wasn’t doing his job very well. He is an incompetent ball scratcher – which can also double as an insult.

His second line of defence is:

“I pride myself on being a morally good person, and that’s why this past week has been so difficult, as people have been quick to label me a cheat.”

The thing about morals is that they are internally generated. It’s an individual thing. You can do something you consider morally wrong without breaking the law, but in different circumstances you can also break the law without feeling like you have morally transgressed.

As far as cricket as a whole is concerned, we suggest that the unwritten code is that ball tampering only becomes morally wrong at the point at which you are caught.