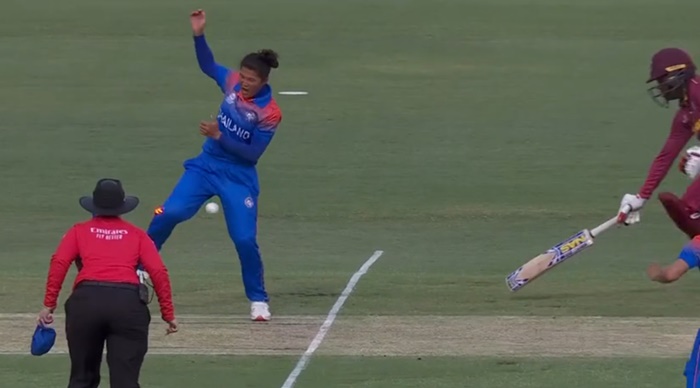 This was, apparently, highly likely. According to Jrod, women’s cricket features a hell of a lot more run-outs than men’s cricket.

The fact that the fielding restrictions keep fielders closer than in the men’s game is a large part of the reason why. It means they get to the ball quicker for one, but it also means it’s harder to find gaps and so the batters are more likely to get bogged down and do something stupid.

Thailand’s first World Cup wicket saw the West Indies’ Lee-Ann Kirby – who was on 3 off 15 balls at the time – glide the ball straight to a fielder only for her batting partner, Hayley Matthews, to conclude, “Ah, to hell with it, let’s try and pinch one anyway.”

We don’t know a great deal about Lee-Ann Kirby, but she doesn’t have the air of an irrepressible one-pincher. This view was rather borne out by what happened next.

Upon seeing Matthews haring down the wicket like someone disinclined to reflect on the decisions she has made even in light of new evidence, Kirby rapidly accelerated.

That acceleration took her to a respectably swift pace for, we would guess, around two paces, at which point she decelerated into a kind of fatalistic lope.

Unfortunately for Kirby, fate – and perhaps more significantly Naruemol Chaiwai – decreed that the ball would strike the stumps without the intervention of a second fielder.