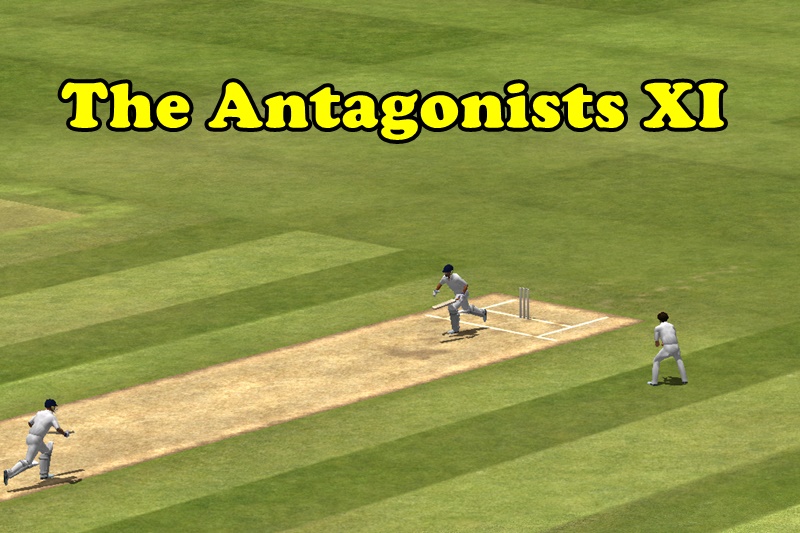 The basic premise of The Realm’s England XI is that it comprises players we love and can’t help but root for. To maximise excitement, they obviously have to play against a team we absolutely could not bear to lose to: The Antagonists XI.

The first time we picked this team, it was a failure. It came out kind of samey with just a dash of incoherence.

So we tried again. We gave it a bit more thought and tried to be more creative.

That team was even worse.

So for our third attempt, we reverted to the players who’d formed the spine of the first team and then we really leaned into that.

What we’ve ended up with is… an Australia XI.

To our mind this is a purer and more truthful way of going about things. It’s definitely interesting to trawl through world cricket and pick out arseholes from every nation, but what you end up with is showy and artificial.

They’re also overwhelmingly from one era. This, again, is not a coincidence. England lost every Ashes series from 1989 to 2002-03 and with each defeat we hated them more and more.

If you understand nothing else from this article, understand this: that run of defeats and the exponential loathing for the team that inflicted those defeats is why the 2005 Ashes was so amazing. It is not a series that should be considered in isolation. The emotions were built on the foundations of what preceded it.

Which isn’t to say that the 2002-03/2005 vintage Australia side was flawlessly objectionable. It’s a tough team to get into, but some players have managed it.

Steve Smith is in – not for the cheating thing – but because Steve Smith is an unbearable batsman to come up against in an Ashes series.

Mitchell Johnson is in too. We can’t bring ourself to get too worked up about Andy Bichel or Michael Kasprowicz, while Brett Lee was actually hugely ineffective against England. Johnson though? He had a moment there, didn’t he?

Steve Waugh is in too because that period when England were getting battered is essentially his Test career. He even made a ton in the 1990s Ashes Rematch, the prick.

This could have gone either way, if we’re honest. Warner is unquestionably an arsehole (it gives him special powers) but we’ve long felt he is primarily – perhaps even exclusively – an on-field arsehole. Away from cricket, when he’s not being driven to madness by the overly-competitive part of his personality, he seems a lot more thoughtful and self aware.

He’s also lost Test matches to England quite a bit. And he’s been bowled out by Stuart Broad quite a bit too. These kinds of things really dilute the vitriol.

So Warner’s been edged out by Justin Langer.

It’s true that Langer is more of a bell-end than an arsehole, but he is still annoying and this is compounded by his playing record. He averaged 50 against England. That’s more than Matthew Hayden, Ricky Ponting or Adam Gilchrist. It’s also more than Michael Slater, who had a decent shot at making this team.

But here’s the clincher: Hayden and Langer batting together at the top of the order, being all pious and self-important and talking about themselves like they do the most important job in the world. That’s why Langer’s in the team. So that we can reunite The Elite Brotherhood of Toolery.

Here’s the team. They’re going to play a Sim Series Test match against our Realm XI, starting on Monday. It is going to be a painful disaster that will emotionally destabilise us to a quite surprising extent.