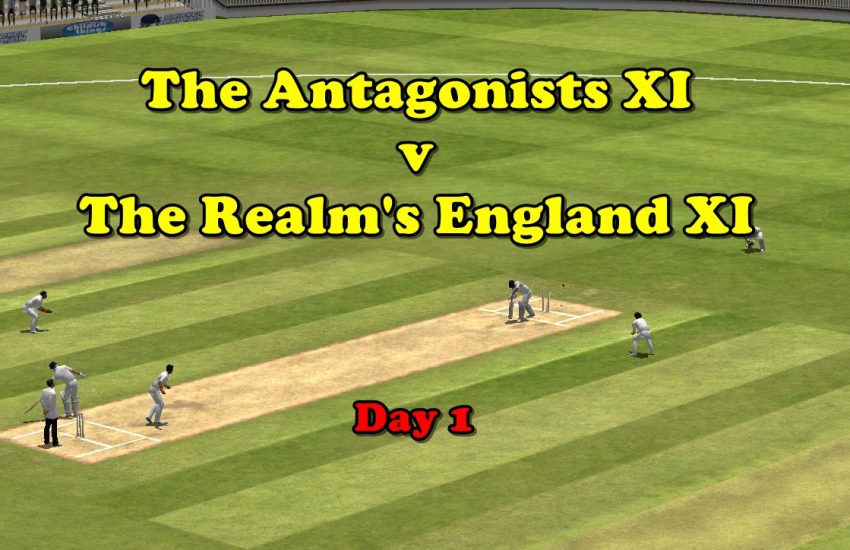 Before we start, it’s worth having a very quick Sim Series recap because a lot of these players have already played this format.

We’ve played two 1990s-est Ashes Tests (and let’s be honest, this is a very similar thing again). Notable performances from those matches include Graeme Hick top scoring in both innings of the first match and Steve Waugh making 120 in the second.

A couple of other players had significant moments too. Mike Atherton played just about the most incredible shot ever played on day one of the rematch, while Darren Gough gave England an outside shot at a win with a spectacular spell at the start of day five.

Going even further back, we also shouldn’t forget our initial review of Cricket Captain’s ‘All-Time Greats’ mode. In the first of three matches played for that review, Marcus Trescothick made 144, Matt Prior made 93, while Rob Key made a 300-ball hundred and also took wicket.

You may think that Key’s the weakest player involved in this match, but his Sim Series record is 344 runs at an average of 86.00 plus a bowling average of 4.00.

Given the teams, the Aussie Antagonists are firm favourites with a draw the second most likely outcome. But what if our England team actually won? What if? What if?

Were that to happen, we wouldn’t any questions about the outcome, so we’ve declined home advantage. This match is being played Down Under.

Athers is quite late on the first ball, but by the end of the over he is still not out, so that’s kind of a success.

Mitchell Johnson is on at the other end rather than Jason Gillespie. He starts with a maiden to Marcus Trescothick.

Trescothick edges the fifth ball of McGrath’s fourth over between keeper and first slip where Matthew Hayden takes a depressingly competent diving catch.

Hayden is slapping back quite noticeably.

Adam Gilchrist could probably have gone for that one.

The score is 6-1. The great man Rob Key walks in. Past performances would indicate that he is likely to take an approach that might charitably be described as ‘watchful’. Considering Trescothick was only able to make one run off 24 balls against these bowlers, that might not make for electric viewing.

Gillespie replaces Johnson, who conceded two runs in his five-over opening spell. Key immediately flays him through midwicket for four! (Feels like we may as well celebrate what we can here.)

Steve Waugh replaces McGrath. The man is obsessed with bringing himself on to bowl. Perhaps his feud with Shane Warne could prove England’s trump card here.

Oh, okay, Warne replaces Gillespie. That sliver of hope lasted all of an over.

GAAAAAAAAAH! Key edges Waugh to Gilchrist for 11. At least it wasn’t Damien Martyn this time.

It’s 28-2. Graeme Hick is next man in. First ball he faces from Warne, he pans it straight over long-on for six.

Gillespie replaces Waugh. Hick is caught and bowled for 8.

Paul Collingwood is next man in. Suppose the only thing you can say here is at least it definitely won’t be five full days of misery.

Colly plays and misses and thick-edges a four and somehow bumbles through to lunch.

This is rubbish, isn’t it? Whose bright idea was it to pit all of the players we cared about the most against the exact group of machine-like players we’d least like them to lose to?

There was a real purity about that England performance this morning. They’re obvious underdogs yet we felt faint optimism when the toss went their way. Then it all just went shit.

Warne bowls the first over after lunch. Collingwood plays and misses.

McGrath is on at the other end. He concedes a single.

It seems like this is the part of the innings where England fight back a bit and you can’t quite suppress your demented optimism.

This may well prove the high water mark for this Test match, so here he is cutting the four that got him there.

Hope that footwork doesn’t foreshadow something.

Collingwood meanwhile is missing everything, getting hammered on the pads and then occasionally hooking a four in front of square.

Johnson gets him LBW for 32.

He edges Johnson to slip for 1.

It’s 114-5. Matt Prior is next man in. Just a reminder that it’s Darren Gough at eight.

Prior fends a Johnson bouncer to Ponting at short square leg.

Gough hits his first ball down to fine leg for four.

That’s the end of the over and after Athers takes a single, he hits his next two balls, off Warne, for four as well. Three balls into his innings and he has become England’s third-highest scorer.

Things calm down for a bit and then Warne bowls Gough in the last over before tea.

There’s a real danger here that if we can’t stretch this match to at least four days, we’re going to have to write an extra article to get through the week.

Mitchell Johnson gets things underway after tea, which makes sense given what happened this afternoon. Warne is on at the other end.

Harmison is caught behind for four.

It’s 145-8. James Anderson is next man in and he is not going to try and score any runs.

Atherton and his duff back play Johnson straight to short square leg. It is 145-9 and James Anderson is going to have to try and score some runs now because Monty Panesar is the last man in.

If England can get even slightly closer to 150, we can probably consider that a success from this point.

Monty pulls with all his might and fluffs the ball into the leg side for one. Huzzah!

Monty square drives very slightly past the close fielders for another single.

Monty on-drives Mitchell Johnson for four! Oh man, that was amazing. That was just about as good as cricket gets and we’re not even joking. That’s also the 150. Monty Panesar is a gift from heaven.

Well, taken as a whole, that was execrable.

Anderson opens with Harmison. Gough is playing the Simon Jones reverse swing role in the attack – although if Australia bat for long enough that the ball starts reversing, England will probably lose by an innings.

Matthew Hayden and Justin Langer start really sensibly and it’s the 10th over before there’s a four.

Langer is caught by Flintoff in Anderson’s seventh over.

Ricky Ponting comes in and Flintoff replaces Harmison. There’s just under half an hour to go.

Gough gets a couple of overs before the close of play.

“Lead” is a funny word to use there.