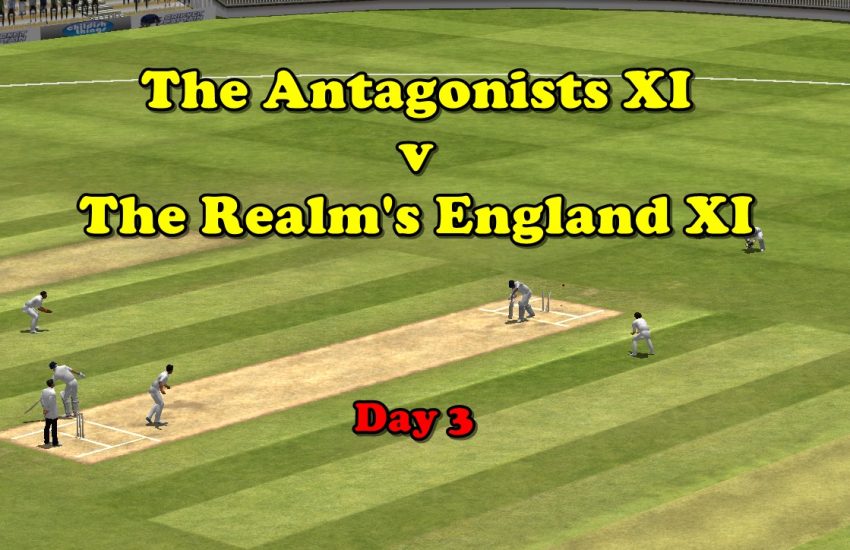 Taken in isolation, day two was less rubbish than day one. However, the nature of Test cricket is that it cannot be taken in isolation, so in fact day two compounded day one such that we arrive here at day three in an even worse position than yesterday morning.

England are 19-0 and 208 runs behind. That’s pretty much where you’d want to be in your first innings, but unfortunately this is their second.

At the other end Mike Atherton will be facing Glenn bloody McGrath, which is a real recipe for success.

Inside the first over, Trescothick is caught and bowled, cutting Johnson.

Rob Key minces Johnson for a pair of fours.

He absolutely drilled the second one.

England inch to 50 and Shane Warne comes on.

Key hits the straightest straight drive ever seen. Somehow the umpire didn’t even flinch as the ball skimmed his beck and shoulder.

England reach lunch on 87-1 and that is their best session by an immeasurable margin.

The way this is going, pretty soon Steve Waugh will be bringing himself or Damien Martyn on to winkle out Key.

Waugh gives himself one over.

The world’s dullest session ensues, but we very quickly reached a point in this match where dull is fantastically good for England.

Shortly after the resumption, Key inside-edges Warne to Gilchrist for what can only be termed a “battling” 47.

Graeme Hick is next man in. There are 11 overs until the new ball, but to be honest Warne will probably prove a bigger problem for him.

Apparently oblivious to this, Hick creams his first ball through the covers for four.

A short while later, Johnson goes round the wicket and Hick is adjudged LBW. (We’re using the word ‘adjudged’ in that loaded way where you don’t really think it was out but you’re not quite willing to say so explicitly.)

Paul Collingwood is the next man in. Four overs until the new ball.

Collingwood is beaten by Johnson. Australia take the new ball.

Atherton is into the 90s by this point. We’d better mention that so that the tension can build. We wouldn’t want him to be run out for 99 without you first having a bit of time to think about him maybe making it to three figures.

The score is 181-3, so Australia are still 46 ahead. We don’t want to go crazy here, but there’s an outside chance of sidestepping an innings defeat.

Atherton lofts an absolute nothing ball from McGrath to Johnson at mid-off for 93. (We truly believed that setting him up to be out in the 90s a couple of paragraphs ago would somehow have protected him from that actually happening. We are actually kind of shaken that this illogical ploy didn’t work.)

Andy Flintoff is next man in. He hits some fours and misses the ball a bit and edges the odd one.

Paul Collingwood does much the same thing, only without the fours.

The two of them make it to the close of play. Australia lead by six runs.

It’s been a very good day for England compared to the first two. They have a really good chance of securing a 10-wicket defeat here.