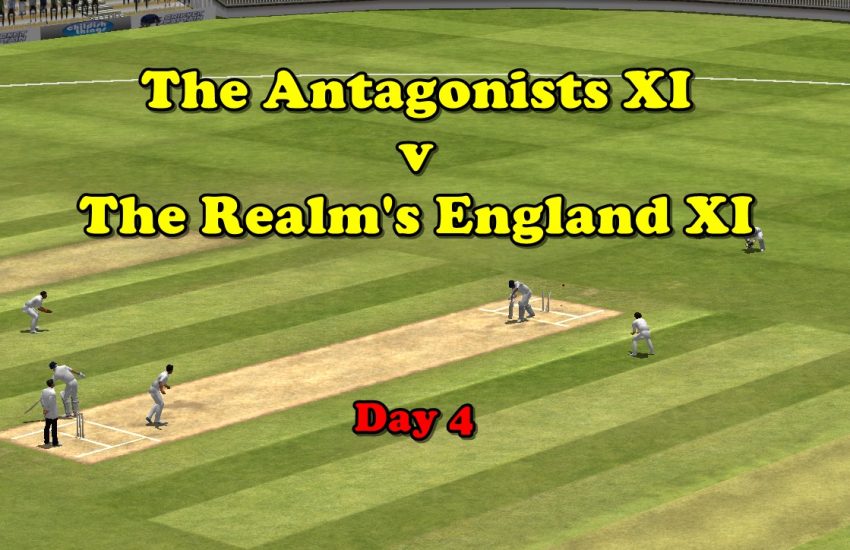 England made 202 runs and lost four wickets on day three. It was very boring and far and away their most successful day.

Australia still lead by six runs. Paul Collingwood and Andy Flintoff are at the crease.

Don’t get ahead of yourselves. Darren Gough is batting at eight.

Flintoff batted quite zestily late on day three. This morning he is becalmed. Shortly after that he is bowled.

Matt Prior is the next man in. He made a three-ball duck in the first innings. He plays and misses at his first, then survives the next two deliveries. Signs of improvement there.

Giddy at having just made a ball hundred, Collingwood tries to on-drive Shane Warne across the line and is LBW for 26.

Darren Gough is the next man in. England lead by 20.

Steve Harmison is next man in.

Harmy takes a single off the hat trick ball, which allows Matt Prior to edge the one after straight to Steve Smith for a four-ball duck.

Fears that Prior could be left stranded by this tail have proven woefully unfounded. Two innings, seven deliveries, no runs.

James Anderson is next man in.

James Anderson is LBW for 1.

Monty Panesar is next man in.

Harmison hits four fours as Warne’s next over goes for 18.

That was something. They weren’t even slogs. Not really.

While we were trying to get a screengrab to prove it, we noticed that after the fourth four, one of the slip fielders started haring off in the exact opposite direction to the ball.

The ball’s gone down to fine leg. Where’s he off?

We’re marking this one down as a moral victory for England. And we ask you: is there truly any finer form of victory than that?

Harmison eventually falls LBW to Warne for 32, propping forward when he should have been slogging.

Anderson opens the bowling with Harmison.

Matthew Hayden nicks Anderson to Flintoff for 3. We can feel the pride that is frankly all we’re playing for here positively welling up inside.

Australia need 55 to win and a 10-wicket defeat has already been COMPREHENSIVELY AVOIDED.

Stick THAT in your pipe and smoke it.

Justin Langer hits Harmison for two fours and we sink into the Slough of Despond. Ponting then hits him for six and honestly, what was the point of this? What were we ever hoping to achieve by playing this game?

With Australia needing just four to win, Flintoff comes on to bowl because he’s on a hat-trick and we might as well find out how that goes.

Everyone crowds round the bat. The crowd does the crescendo roar thing as he runs in.

Justin Langer jabs down on a full one. No run.

That’s something, we suppose.

Mitchell pissing Johnson was man of the match.