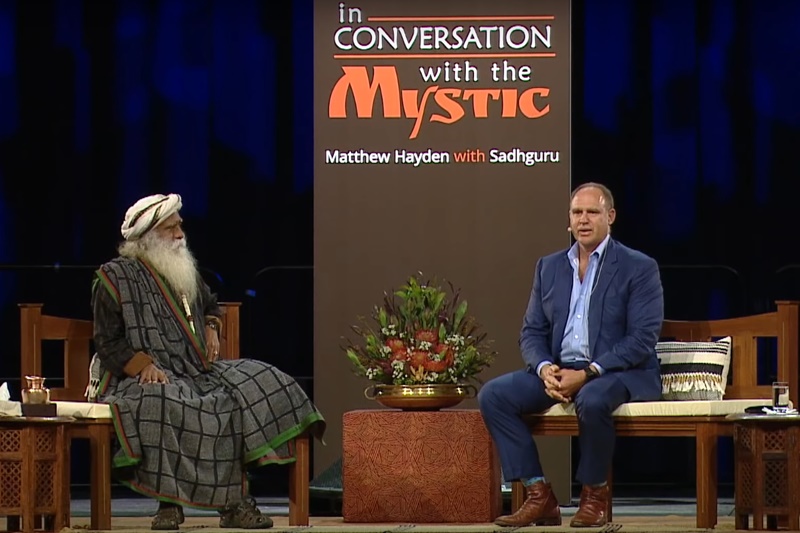 If you don’t know Indian yogi and author “Sadhguru” (Jaggi Vasudev), he’s kind of a big deal. The Isha Foundation that he set up in 1992 is said to have over nine million volunteers. A lot of people like Sadhguru. They think he’s wise. In August 2019, Sadhguru agreed to get on stage and talk to Matthew Hayden about stuff.

Hayden is not the first cricketer to do this kind of thing with Sadhguru. Sachin Tendulkar spoke to him in front of plenty of people in 2015 and he also did a thing with Virender Sehwag, during which the opener’s, “see ball, hit ball,” philosophy was rewritten as the slightly-less-catchy, “forget expectations, just hit the ball.”

So what arose from this timeless meeting with the creator of The Hayden Way?

In (a very long) conversation with the mystic

Okay, first of all we’ve got to level with you. Much as the prospect of watching the full 2h10m video appeals to us, we don’t need an internationally-renowned spiritualist to tell us that our time on this Earth is finite.

Spinal Tap and The Big Lebowski ain’t going to rewatch themselves and Smashtastic Cricket ain’t going to play itself. As such, we settled on watching a very short bit at the start before skipping around randomly.

One thing that we noticed very early on is that neither of them is very obviously the host.

We kind of thought Sadhguru would be running the thing, but it’s actually Hayden who starts things off by welcoming the yogi before providing, “the definition of Australia,” which is apparently, “the faces that we see in front of us.”

After that Sadhguru makes a lame joke about the title being “beyond boundaries,” thus further diminishing what was already a terrible and hackneyed play on words.

Then he does a really cool move. Just as you’re expecting him to ask some sort of specific question to get proceedings underway, he throws in a sudden “please” and unexpectedly cedes the floor to Hayden.

It’s a classic hospital pass. You should definitely throw in an open-ended “please” the next time you’re in a meeting.

He eventually asks, “What force is dragging us all together?” and finally we’re sort of underway.

So what did Hayden say?

This website is not especially interested in what Sadhguru says because he is not an ex-cricketer who has concluded he is a public speaker on the basis that he has ‘cemented his communication skill sets’. We do however have to mention the moment where he uses a surfing analogy – “some people are crushed by the wave” – despite Hayden having once broken his spine when he got crushed by the wave while surfing.

Disappointingly, about 99.5% of the video is Sadhguru talking and Hayden mostly restricts himself to asking questions. (It turns out he is the host).

We did find a few nice additions to the Gospel According to Haydos though.

And it seems appropriate to finish with this one: “Australia is – correct me if I’m wrong – full of things that make no sense whatsoever.”

Thanks to The Smudge for pointing this out to us.