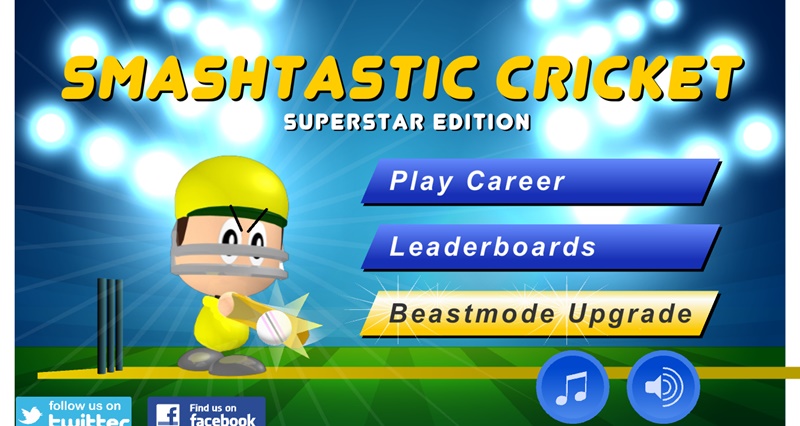 After loading the game, you name your batsman (all you do is bat in Smashtastic Cricket), pick your nationality and allocate a few points to skills that you don’t yet fully understand.

Then coach Boff welcomes you to whatever team you selected.

It doesn’t matter what team you pick, Boff is your coach. He’s coach of all the major nations too.

Technically, the domestic teams are all Australian “Big Smash” teams but you can easily overlook that because they only really use the nicknames.

We pretty much always played for the Miners because our home town was originally a mining town. (For a long time after that, it was a chemical works town. Now it is really just a load of people in suburban housing driving along A-roads to work in PPI call centres.)

Now you can play a game.

You start off batting at six, so the match is to a great deal out of your control. We rather like this. You influence results without deciding them – and this cuts both ways.

You’ll tend to come in for the last few overs. You might need just a handful of runs to win or the game might be all but lost already.

Or you might bat first and have no jeffing clue what a good score will be.

If the top order does the job, you may even not bat at all. Except insofar as you’ll miss out on bonuses, not batting doesn’t really matter – you just move onto the next game.

Timing matters, but the game’s not brutally unfair about it. It’s not just six or out. There’s a decently-sized grey area too.

You can see the field setting and it tells you what type of bowling you’re facing. As well as timing, the factors affecting how well you hit the ball are your character’s skills, the shot you choose (e.g. don’t try and square cut a leg-side wide) and your level of fatigue.

Hitting the ball tires you out a bit and trying to leather it tires you out more. We think running has an effect too. Conversely, if you block it, you recover energy. You recover when you’re stood at the other end too.

Eventually you’ll pop one straight to a fielder and then it quickly simulates the rest of the game.

However, entirely negating this, you can’t give your guy a proper name because you’re only allowed to use a very limited number of characters.

Our default player-naming system is Military Rank + The First Puerile Word That Comes Into Our Head. We were most disheartened to discover we couldn’t have Lieutenant Nutsack, Fieldmarshal Plop or Admiral Bumhead.

After the game, you get points based on your performance. You mainly get points for runs, boundaries and for winning games or tournaments. (You can actually get more points for winning a game despite not batting than for scoring a few in defeat.)

Boff gives you a grade too.

If you level up, you get a skill point.

Spirit is the one that you’ll keep intending to improve, but will never actually assign skill points to.

All the others to some degree govern how cleanly and how hard you’ll hit the ball.

As results stack up, you’ll maybe qualify for the semi-finals and final where even bigger personal improvement points are up for grabs.

You might also get to move up the order a spot. The highest we got was number three because in the standard free version (which features in-game ads) you only get to play four seasons. If you splash out £2.79 on ‘Beast Mode’ you can play on for 20 seasons.

As you can see in the screenshot above, there are other competitions to play in too. The more curmudgeonly among you can make your own jokes about the World Series being baseball and T20 being like baseball.

No, you don’t get to play Test cricket.

Smashtastic Cricket is a fun distraction. The matches themselves work well. You encounter different situations and different fields, so every match is a slightly different challenge, but the actual mechanics of batting are a piece of piss to pick up.

It’s then got a bit of longevity because the matches have context and Colonel Pubes is getting better and better with every passing game.

It’s not crazy in-depth, so eventually you reach a point where you’re not really getting anything new out of playing it. We’ve no real burning desire to sink that £2.79 into getting Beast Mode, but we can imagine returning to the free version for five or ten minutes every now and again.

Smashtastic Cricket is available on Android and iPhone.