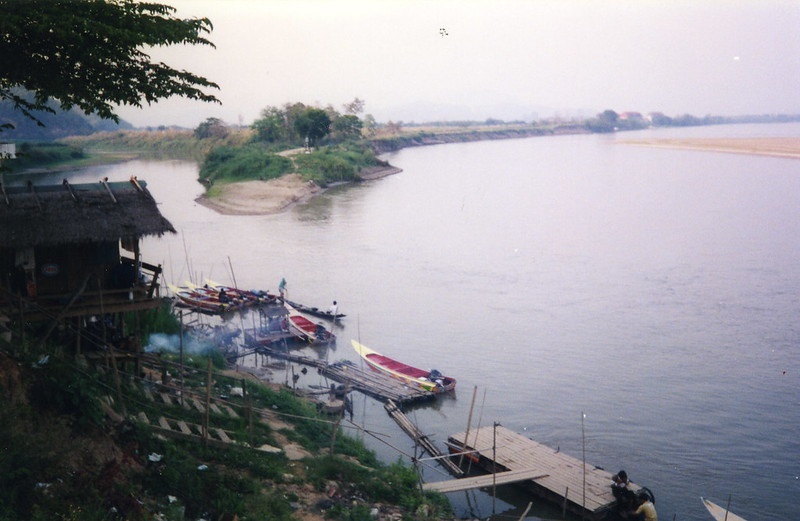 Daisy and I started the day in Chiang Rai province, on the golden triangle between Thailand, Myanmar and Laos. Above is a picture of us at the actual triangle, where you can see a tiny bit of all three countries in one picture.

As luck would have it, there had been a very recent opening up between Thailand and Myanmar the day before our visit, so we were able to pop into Myanmar for an hour or two on a temporary visa.

Within five years, Daisy and I were to visit both Myanmar (properly) and Laos. We even jumped the border from Laos into Thailand in 2001, but that’s a different story.

Naturally we visited several temples that day, in Chiang Rai province, in order to prepare ourselves spiritually for the Cricket World Cup final.

Then the long drive from Chiang Rai to Chiang Mai.

Chiang Mai has good places to eat and apparently has vibrant night life… but perhaps not the night life for us. Certainly not on the night of the Cricket World Cup final. Not once we discovered that Indian sports channels were available in our hotel room.

Chiang Mai is a couple of hours ahead of Lahore, so there was still a fair chunk of the cricket match left to watch when we returned to our hotel room after our evening meal.

We were staying at the Dusit Princess Hotel, right in the heart of the night bazaar district. Website photos of the place look spectacular, as did the brochure photos back in the day.

TVs back then were bulky items that required hefty manoeuvring to position, such that Star-crossed cricket lovers (did you see what I did there?) can both follow the game while supine.

Daisy fell asleep a few overs into the reply, while I took great pleasure in watching until the very end of the match.