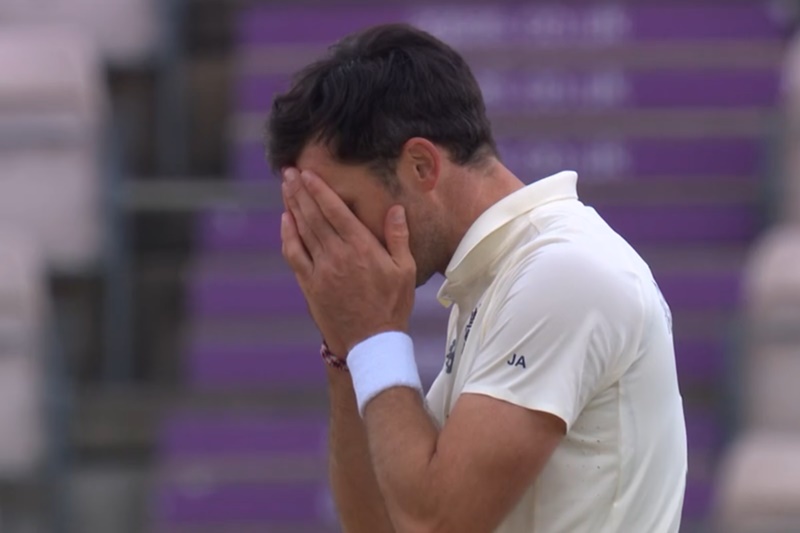 We’ve written about James Anderson a lot over the years. He has a lot of qualities, but one of his finest – to our mind – is his irritability.

We named James Anderson in an England XI that comprised the players we have invested in the most and we also crowned him Lord Megachief of Gold 2017. If you want to read about how much he means to us or how great he is at cricket, those are the pieces you should read.

Today we want to talk about his tetchiness. Because Jimmy’s tetchiness is a wonderful thing.

Exhibit A: Here he is gleefully celebrating a run-out.

Jimmy is a man who does eventually get over on-field disappointments – but only once he has very visibly processed them. In this instance, Stuart Broad had run the batsman out after dropping a catch and Jimmy was still coming to terms with the drop. (This was actually the culmination of a whole series of things going wrong for Jimmy against Pakistan one day last summer. You can read all about it here. It was very entertaining.)

Dropped chances are of course a recurring minor frustration for Jimmy. There was a time when he’d sometimes get angry with the fielder when this happened, but nowadays he tends to opt for abject existential despair at the entire universe and everything within it.

For example, here’s Jimmy shrugging off a dropped catch from earlier in that same match.

And now here he is in another match, shrugging off an entirely different dropped catch.

But these are really just brief moments; mere windows into the abyss of ill-temper that is James Anderson when things aren’t necessarily going exactly as he wants them to.

Jimmy is at his best when you can see that he’s highly likely to react like this. The twin signals that he is in this mental state are (1) relentless chuntering (often to himself, sometimes to the batsman, frequently to no-one at all) and (2) turf-kicking. When these activities are occurring even semi-regularly, you know he’s pissed off.

This brings us to one of Jimmy’s finest tetchy moments and one that we feel sums up what’s so great about his proclivity for slumping into an absolutely godawful mood.

Australia were 325-7 in their first innings and Ryan Harris was on 22. Ben Stokes bowled one on off stump and Harris sliced it to Anderson who caught it.

Utterly ENRAGED at this success, Anderson immediately volleyed the ball back at the stumps as hard as he could.

Stokes was really happy at having dismissed an Australian batsman. Jimmy was livid.

Jimmy was livid because England had already lost the Ashes and trivial things like taking wickets and potentially winning a Test match (spoiler alert: they didn’t) weren’t going to stop him feeling really, really, tremendously grumpy about everything. You know someone’s truly bone-deep dissatisfied with things when a positive development elicits such a strongly negative reaction.

Back in the days when he had a radio show on XFM, Ricky Gervais asked Karl Pilkington what his favourite word was. Pilkington went with “fed up”. His argument – which rather overpowered the pedantic one that ‘fed up’ isn’t a single word – was that the term perfectly summed up a particular emotional state for which there isn’t really an equally perfect synonym.

James Anderson cares a great deal about the fortunes of the England Test cricket team and when they aren’t doing well, he is fed up.

Did you know you can sign up to get King Cricket articles by email? Will wonders never cease?