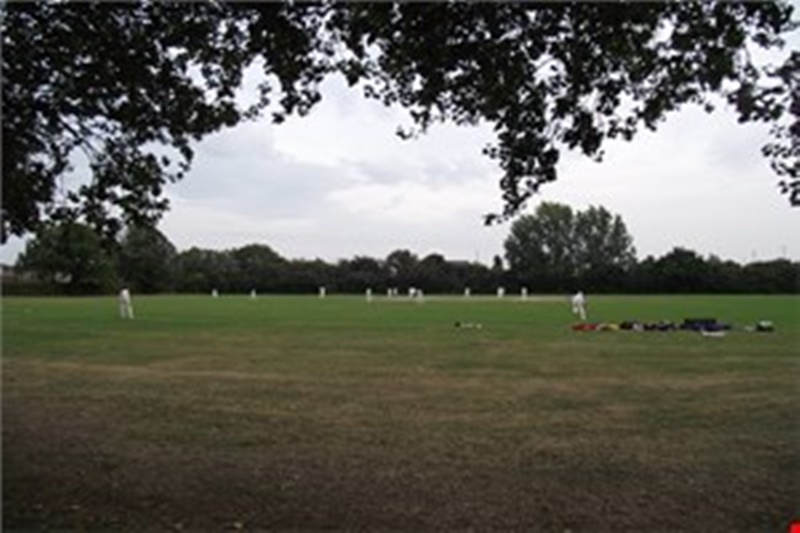 Ged Ladd played many matches against Charley The Gent Malloy’s Children’s Society team in the late 1990s and early 2000s.

Most of those matches took place in Regent’s Park or Holland Park, but on one occasion, in 2003, neither of those Royal Parks were available, so the match was played instead in The Queen Of Suburbs, Ealing. The above picture, not from that match, is borrowed from the Hire A Pitch website, where you can still book an Ealing Central Sports Ground pitch.

That Ealing (in truth, Perivale) location made this the ideal opportunity for a visitation from Daisy’s mum, The Duchess of Castlebar, as the Duchy of Castlebar happens to be very nearby. The Duchess had, apparently, for years wondered whether Ged could actually play cricket. No pressure.

As usual, Ged arrived at the ground early. He soon encountered an enthusiastic young Kiwi named Phil, who was one of the many antipodean ringers – aka temporary Children’s Society staff – who tended to appear once only for such fixtures.

Phil invited Ged to bat against his warm-up bowling. The pitch was clearly a little two-paced; the first delivery was straight and stuck in the pitch a little, such that Ged lobbed Phil a simple return catch. Ged explained to Phil that bowling straight like that is considered to be ungentlemanly conduct in these parts.

The teams gathered. The Duchess and her entourage (Daisy) arrived just before the start of the match. Ged won the toss and elected to bat. In those days, Ged tended to bat at seven or eight.

Ged Ladd & Co got off to a decent start: a couple of decent partnerships; then, when Phil came on to bowl, a flurry of wickets. Ged’s turn soon came.

Ged was to face Kiwi Phil. The first delivery was deceptively straight and cruelly stuck in the pitch a little. Ged tried everything he could to avoid the inevitable, but no amount of determination could prevent him from lobbing the ball back to Phil for a simple return catch and a primary.

“Never mind,” said The Duchess, before turning to Daisy with the decree, “I have other matters to attend to now; let’s go, Daisy.”