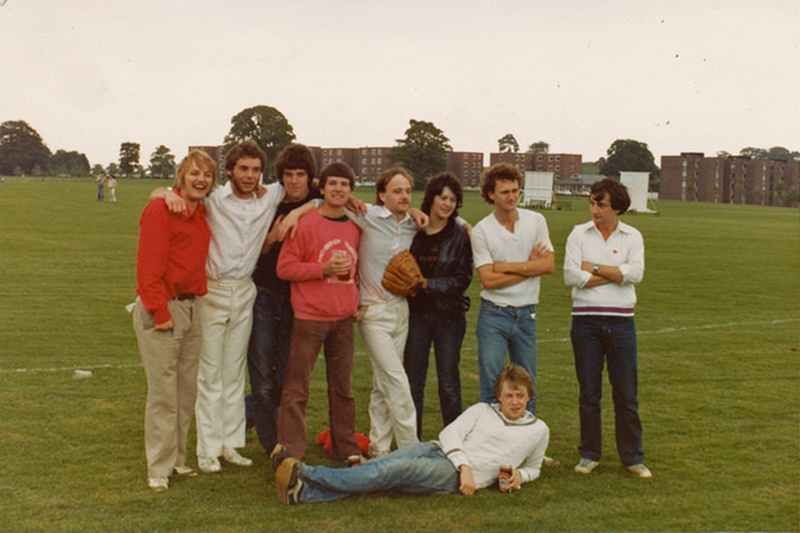 Ged Ladd played but three matches while he was at Keele University. In all three he represented The Players (of the left) against The Gentlemen (of the right) in a festival week tradition that had been established approximately one year before Ged played.

The story of Ged’s selection for the first of these matches is worthy of note; indeed you might wish to read Ged’s full piece on the topic. The title of the piece comes from Ged’s sole 1982 diary note on the matter, “Got Roped In To Playing Cricket All Afternoon”. The story is literally psychedelic; Ged was a late replacement for a friend who had dabbled too heavily with an hallucinogen the night before. In 1982, Ged neither batted nor bowled, but he did manage to drop several dollies before taking a stunning catch. It’s well worth a read.

Selected ahead of the match in 1983, Ged’s sole contribution was to run back and forth a couple of times while someone who could bat finished off an historic first win for The Players. Ged described that match as a “famous left wing victory” in his 1983 diary, a short report of which can be found here.

The 1984 match was far more successful, but also controversial. The perennial Players captain resolved to give Ged a go, so he opened the batting along with a proper batsman. The result was a 50+ opening partnership in a chase of around 100. Ged’s fearless defence held up an end and contributed a few. But when the instruction came to Ged, “hit out or get out,” Ged was soon gone.

But what was Ged’s exact contribution to the 1984 match-win-establishing opening partnership? Ged was convinced that he scored four runs, while the scorer insisted that Ged had scored three, as one of Ged’s runs had been cruelly adjudged a leg bye. You can read all about the 1984 match, including the injustice that was leg-bye-gate, here.

As far as I can tell, Ged’s only other cricket performances throughout the 1980s were umpiring ones; some quite spectacular. Indeed, I plan a future short series; “Ged’s Great Umpiring Performances”.

So the following run chart comprises Ged’s entire 1980s playing career. That disputed leg bye would have improved Ged’s average quite a bit.

There are no photos from Ged’s three matches, but the above picture (with thanks to Frank Dillon), shows The Players team, almost certainly 1981, with Ged’s flat visible behind the rabble.