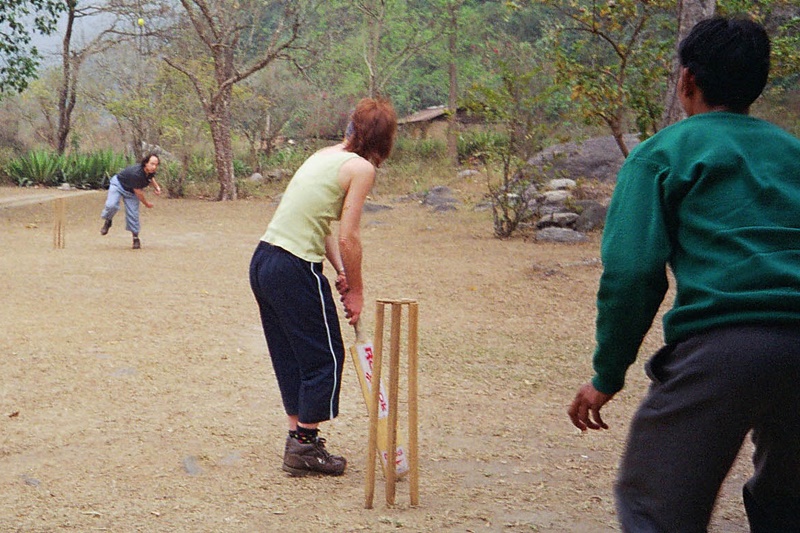 Ged’s highest ever score, 51 not out, was achieved in India during the annus mirabilis that was 2005.

The bad news, for connoisseurs of top-level cricket, is that this was an informal game of cricket on the side of a river in the Darjeeling Hills. The good news, for connoisseurs of King Cricket match reports, is that the amateur nature of the encounter allows – indeed encourages – the biographer to go into excruciating detail in this match report.

The match was a matter of happenstance. Ged and Daisy were touring North-East India, at that juncture staying on a tea estate, Glenburn, near Darjeeling.

On learning that Ged and Daisy are keen on cricket, the hosts suggested a day of walking, picnicking and then some afternoon cricket at the estate’s riverside campsite with those of the estate workers who like to play.

The contemporary (2005) journal includes the picnic aspect of the story; a vital component in any cricket day for Ged:

Jeet directed operations for a fine picnic lunch of barbequed chicken tikka, pickled cucumber salad, chicken mayonnaise with apple, meatloaf, tomato salad and leaf salad (including rocket). We couldn’t even touch the potatoes & rice and barely touched the bananas in caramel sauce. Washed down with a very agreeable beer.

The record of this momentous cricket match includes some rare photographs; the only known photograph of Ged bowling to Daisy and one picture of Ged playing an extremely rare offside shot, albeit rather awkwardly.

The contemporary journal picks up the great man’s match highlights:

After taking out Daisy caught & bowled in warm up, Ged then made 25 before retiring [not out]…- others batted – Muken batted very well before falling stumped by Ged (yes really) off Sujit’s bowling for 44…Ged then had two or three stumpings off his own bowling & resumed his innings to complete 51 not out before retiring again (& closing the game).

There is photographic evidence of handshakes all round and a spirit of bonhomie amongst the former combatants. Just as it should be.

One other extraordinary rarity survives from this historic match; a wagon wheel of Ged’s personal-record-breaking innings, drawn by the man himself, probably that very evening.

Much of the scoring in “the V” and an agreeable mix of on-side and off-side scoring. Mirabilis indeed.