We’ve missed a couple of rounds of the County Championship because (a) the matches took place after a big slab of shorter format stuff, (b) pretty much all the matches were draws so there wasn’t much to say, and (c) we’re feckless and unreliable.

Last time around, Lancashire had gone slightly top; equal on points with Yorkshire, but ahead on either wins or because of the alphabet – we’re not sure which.

Lancashire are now a bit more top. They thrashed Warwickshire 11 bonus points to 10 with Steven Croft, Haseeb Hameed and Liam Livingstone all making hundreds and then went down to Lord’s for that ground’s increasingly traditional rain delays. The marvellously-named Nick Gubbins made a double hundred for Middlesex and The Great Neil Wagner played both matches.

Yorkshire only played once (and drew) which means the table now looks like this. 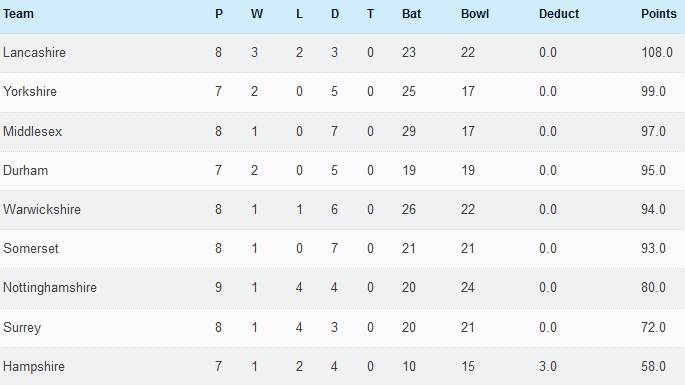 The only match to end in anything other than a draw in the last fortnight was Surrey v Nottinghamshire. Utterly bizarrely, Surrey won. Their two spinners, Gareth Batty and Zanzibar Fan Arsey shared 12 wickets in the match, which is quite a nice thing to happen in this day and age and seems a perfectly reasonable return for a team that’s willing to pick two spinners in the first place.

As for Nottinghamshire, they seem to have turned into one of those teams that’s good on paper but not on grass. This weekend they host Lancashire while Yorkshire will play Middlesex (and at Headingley, so they might actually get a game in).