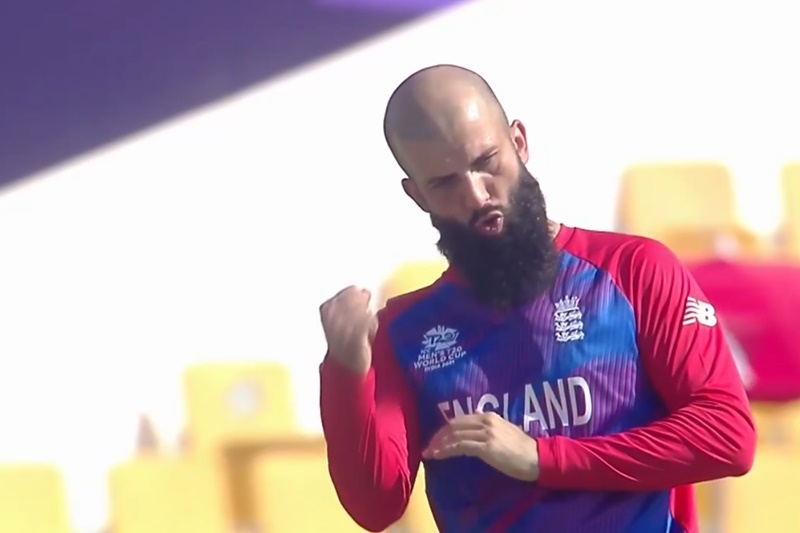 Doing random cricket jobs has long been Moeen Ali’s thing. England have generally employed him as a sort of batting/bowling Polyfilla to fill all manner of cracks, chasms and rawl plug holes.

Like a switch-hitting back foot T20 specialist, this treatment has cut both ways. It’s surely diminished Moeen’s chances of getting to grips with one particular role, but it’s also given him many more opportunities to play international cricket than he’d otherwise have got.

You can pontificate about what might have been if you like, but we’d rather celebrate what was.

Indeed what still is. Because Moeen’s latest job is ‘opening bowler’ – and he seems to be pretty good at it.

Against the West Indies, he bowled four of the first seven overs and took 2-17.

He then bowled three of the first five against Bangladesh and took what we’re choosing to call ‘half of a double hat-trick’ in the middle one.

Maybe T20 opening bowler was Moeen’s true calling all along. Or maybe he’s just shed a load of fatigue and is approaching this tournament with a freshness he’s rarely ever felt.

You can’t get fit without also getting tired. The trick is to rest just enough that the latter subsides without the former ebbing away too.

Moeen has long been worn down by international cricket. He’s played for England over 200 times since his first appearance in 2014. That’s quite the workload even before you factor in all the travelling. There have been various periods of unavailability in there, but these only really advertise how fundamentally unsustainable his workload has been.

But life is simpler now. Limited overs cricket builds to its two respective World Cups. This is one of them. Moeen seems pretty up for it.