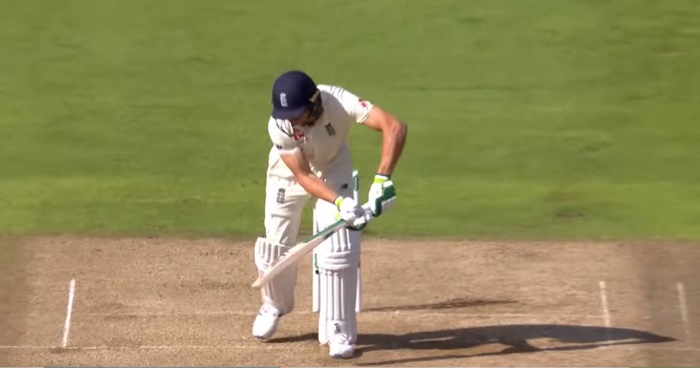 Jos Buttler is a Test batsman who talks as if he needs to approach his innings in a certain way. Maybe taking a philosophy into the middle is counterproductive.

What’s your natural game? Our natural game is a lot of tea, coffee and reading, a small amount of writing, maybe a bike ride and probably three beers late on watching something like Roadhouse, the film that taught Michael Vaughan so much.

As you’d imagine, we play our natural game basically never, which is fine, because the interruptions that prevent it make life more interesting. One of our interruptions is currently asking us to hang rubber dinosaurs off the coffee table with her, so we’re going to go and do that for a bit.

Okay, we’re back. (Not all of the dinosaurs were able to grip effectively but we were quite proud of our innovative wedging efforts that got Deinonychus to stick there. Kudos too to Parasaurolophus for using the back of his head.)

No batsman attracts the term ‘natural game’ more often than Jos Buttler. It’s used so regularly that we’ve actually written about Jos Buttler’s natural game before. And now we’re going to write about it again.

Whatever people think about Buttler in Test cricket, their position tends to revolve around his natural game. Some people say his natural game just isn’t suited to the longest format. Others say everything would be fine if he would only throw caution to the wind and play his natural game. Buttler himself seems to agree with everyone and no-one.

At the start of the year, he said that since he returned to the Test team, “I’ve tried to trust my defence for longer periods of time.”

This has been visibly true. He often seems to be wilfully refusing to so much as look at the touchpaper, let alone light it.

However, in that same interview, Buttler also said that playing his natural game, “is certainly something I’m trying to work out.”

To which one can only say: what? Your natural game is not something you try and do. It’s what happens if you don’t do anything else.

Maybe it’s all those dinosaur-dangling distractions that Test cricket is forever throwing at a batsman.

Test batting isn’t really about defence and it isn’t about being ‘liberated’ to scythe boundaries either. It’s about flip-flopping between those extremes from session to session, over to over and ball to ball. That’s the art of it and also the most difficult bit. It’s about being able to make countless good decisions and somehow doing so without ever really thinking too much.

When Ben Stokes returned to the England team after his trial for the Bristol nightclub thing, he delivered an impressively dispiriting volume of penitent batting. Against India, in particular, he seemed hellbent on playing responsibly to an almost paradoxically unproductive extent.

At Trent Bridge he made 62 off 187 balls. At the Rose Bowl he made 23 off 79 and 30 off 110. There were other examples and it did for a while seem like something we’d have to get used to. Fortunately this phase proved short-lived and transformative in a positive way as he eventually settled into using these new skills more judiciously. It was almost as if in not wanting to let his team down, he had explored the less familiar extreme of batting and added it to his toolkit.

Headingley was the example you’re probably already thinking of. Stokes made three runs off 72 balls before he hit a boundary in that innings. His last 84 runs then came from 67 balls. If those were two separate innings, there aren’t too many people who could have played either of them, let alone both. Stokes himself almost certainly wouldn’t have played the knock without having previously forced us to endure his experimental Tavaré album.

That innings was a bipolar example. More often Stokes has seen fit to operate somewhere in between, finding a nice balance between defence and attack.

That balance is not a constant. It varies from innings to innings, from one passage of play to the next. The trick is to feel the wave and ride it without eating sand like Johnny Utah.

It seems highly unlikely that Stokes arrives at the crease with some specific notion of Ben Stokes Test Batting in his head. He may have some vague plan for how he’ll start, but it will be overwhelmingly situation-dependent. In contrast, Jos Buttler gives the impression of being a Test batsman forever in search of an approach, a template or a formula.

In 2016 Buttler said: “My Test career started well and I was happy but in the Ashes I fell away. I went away from what I do well. I was worrying about how Mitchell Starc, Mitchell Johnson or Josh Hazlewood would get me out and how I would counter it, but in doing that forgot how I was going to score runs and put pressure on them, which is what I’m good at. I have to be more focussed on myself.”

When he was recalled to the Test team in 2018, having been told by the selectors that they wanted him to bat the way he does in white ball cricket, he said: “For me it’s about expressing myself, trusting my instincts and allowing that to flourish rather than fighting it. I’m not just going to go out there and slog, but I am going to try to be positive.”

At other times he has spoken about working on his defensive game and the importance of having faith in it. The comments further up about doing that while simultaneously trying to find his natural game make it sound like he’s caught between two duelling philosophies. He sounds like he’s struggling to square this circle, but really they’re just two aspects of the same thing: batting.

There is something about Jos Buttler and the way people speak to him about Test batting that implies there’s a winning philosophy; some secret to be unlocked and then all will be well for him. Yet the most significant comments are surely those he made himself after making his first (and only) Test hundred.

“I think it shows in Test cricket how it ebbs and flows. For twenty minutes it feels impossible and then for twenty minutes you feel like you’re in control and playing well. You can’t underestimate how much luck plays a part. Human error, dropped catch and I wouldn’t be sat here today either. So I think trying to focus in the moment and stay in your zone and your bubble and play each ball on its merit and within your game plan is all you’re trying to do, I think, for that period of time. And if that means they bowl well and you play out four maidens you’re trying to trust your defence to get through that.”