We’re getting closer, but we’re still not quite there. Send pictures of bats (or whatever) in unusual places to king@kingcricket.co.uk

“Here’s a picture of my cricket bat. It isn’t really in an unusual place – my hallway. It is, however, in two places at once, which I think is pretty unusual for a cricket bat.” 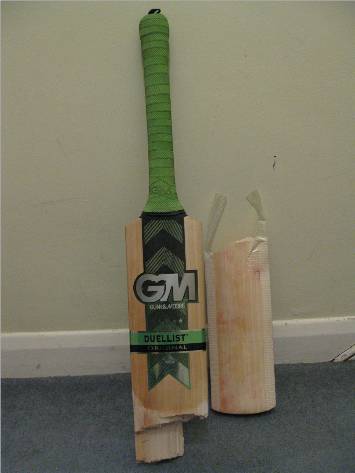 We asked if there was a story of EXTRAORDINARY RAGE behind its unusual appearance.

“Sadly, no. Just a rather limp medium pacer, a solid back foot push and the strange flapping sound of a previously sturdy bit of wood being held together only by two bits of bat tape. Then came a long bout of sulking.

“Rage did bubble up briefly when my wife saw it, burst out laughing and said: ‘Did you do a Ronnie O’Sullivan?’

“I calmed down hours later when I chose to believe her story that she’d deliberately confused cricket and snooker. A bit of me still isn’t sure though.”