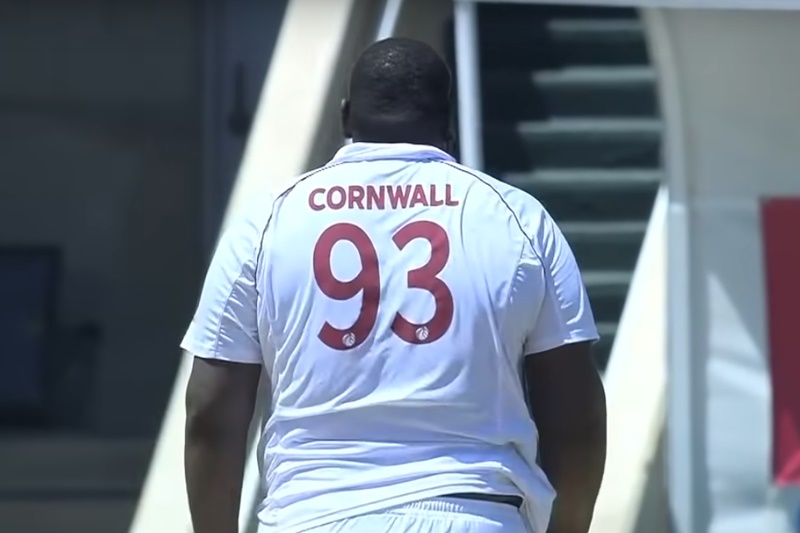 All across the UK, people are waking up and asking: ‘Who is Rahkeem Cornwall?‘ after the majestic blob of cricket damn near beat England in a tour match.

We’d like to leave that last joke hanging there without drawing attention to it, but the thought that someone might leave a comment below making exactly the same joke overtly because they think our wording was just an accident is just too much to bear – which is why we’ve written this long, unwieldy sentence as well.

Exact figures for Rahkeem Cornwall’s weight are hard to come by. We’d guess it waxes and wanes considerably, according to the vagaries of his lifestyle. We’ve seen “20-plus stone” mentioned, which would be over 125kg. He’s 6ft5in though, so this isn’t quite as spectacular as we’d hoped.

Does 40 stone count as 20-plus stone or does 20-plus mean 20-odd? These are questions that demand answers. We’d also like clarification as to whether Cornwall was so-named due to his excessive consumption of Cornish pasties.

We’ll leave you with the latest photo of the great (big) man. There isn’t quite as much mouth-breathing going on as in the pic on his Cricinfo profile page, but the inclusion of another human within shot does give us a sense of scale, so that’s a welcome new development.

For further reading, we recommend the tale of Mark Cosgrove, a man who was given the green light to let his weight get ridiculous, failed to realise that 800 was less than a thousand and then flobbed back into county cricket in 2009.

You may say that’s not a tale; that it’s just three links to posts about the same fat cricketer with no narrative structure and that furthermore there have been loads of other far more interesting Mark Cosgrove developments in the meantime.

To that we say, is it not a tale? Is there not a moral in there somewhere? We then back away from you with an earnest, knowing look on our face, fading into the background as you restate your belief that no, there really isn’t any kind of story there.