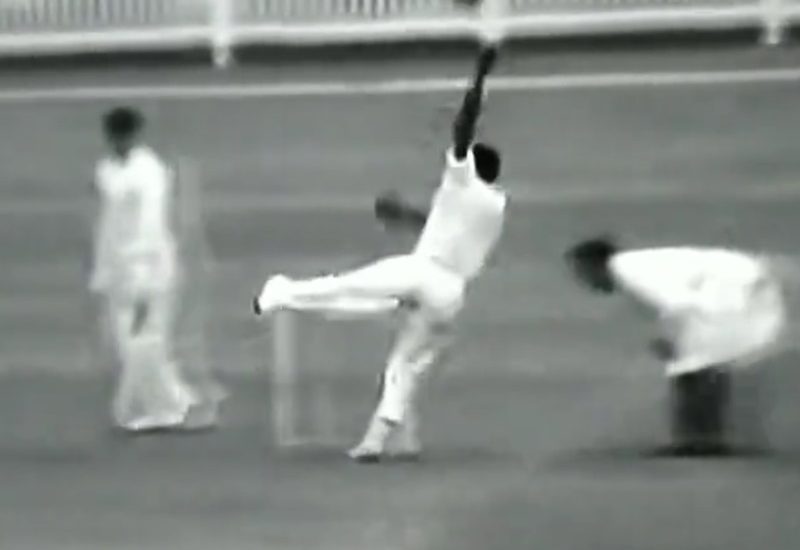 We sent Special Correspondent Dad some footage of Roy Gilchrist this week because we knew he’d played against him once.

If you don’t know Gilchrist, he was summed up in his Guardian obituary as a, “West Indian fast bowler whose temper was even quicker and more fiery than the speed and hostility for which he was rightly feared during his short career.”

Gilchrist’s Test career ended in India after he bowled a heap of beamers in a tour game. The allegation that he pulled a knife on captain Gerry Alexander during that tour may also have played a part in him being sent home.

Gilchrist retained a reputation for deliberately bowling beamers and 18-yard no-balls when he was playing club cricket in the North-West. He’s said to have once hit an opponent in the head with a stump as well.

Dad said that Gilchrist liked to have a few pints before each match and had once explained that this was, “to work up a hate for the batsman.”

It’s questionable whether this was entirely necessary as it seems fair to say that anger management wasn’t a strong point. In 1967 Gilchrist was sentenced to three months’ probation for attacking his wife Novlyn during an argument.

All of this no doubt contributes to his reputation as a rapid and fearsome fast bowler. There’s a possibly apocryphal story that he once hit a sight screen after a single bounce on the pitch.

Gilchrist could certainly put his pace to productive cricket use too though – 57 Test wickets at 26.68 is a pretty tidy return, particularly when you consider that 47 of them came in India and Pakistan.

We know it’s slow motion, but that arm seems to come through pretty quickly, doesn’t it?

Dad faced Gilchrist when he opened the batting in a Sunday game against “Manchester Colonials” (yes, that was their actual name).

“I remember the delivery stride and his front leg seemed to be so high, almost horizontal,” he recalls.

Dad smacked one of Gilchrist’s deliveries straight back towards him. Gilchrist leaned over and half stopped the ball, which trickled away for a single.

“I was dismissed in the next over by his opening partner so I never faced him again,” said Dad, before seemingly suggesting that this dismissal wasn’t perhaps that unwelcome a development.

“When he batted in the evening I was fielding in the covers. He returned my earlier favour and smacked the ball at me, but I held on to what I have always thought was a pretty decent catch.”

Gilchrist shouted at Dad that it was a “fluke” which is a nonsensically great thing to try and claim about the catching of a cricket ball.

Get the King Cricket email