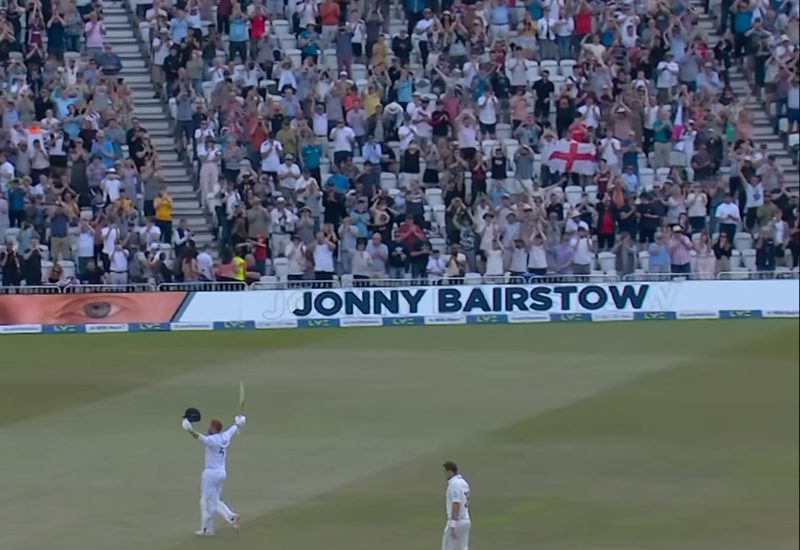 Violence is great, isn’t it? Violence is so much fun. We greatly enjoyed Jonny Bairstow, at Trent Bridge, with a cricket bat.

At tea on day five, England were 139-4, 160 runs from victory and Jonny Bairstow was on 43 off 48 balls, which is quick, but still within the bounds of normality.

Straight after tea, England made 59 runs in four overs, 45 of which were scored by Bairstow, which is very much not normal – particularly in the context of a Test match, where you actually have a choice about how how you go about things.

In a limited overs match, circumstance forces your hand. Jonny Bairstow chose to do this.

It’s no great exaggeration to say that in that short passage of play, England went from losing the match to waltzing it. As tonal shifts go, it was reminiscent of the church scene in Kingsman.

If you don’t know Kingsman, it’s a knowingly daft and at times incredibly violent spy comedy. The church scene is by far the most violent and best.

The context is that Samuel L Jackson’s character has distributed free mobile phones to people and when he triggers them, they make a noise that somehow turns the owner into a frenzied murderer.

There’s a comic quality to the scene, but as you can no doubt deduce, the comedy’s built on extreme frenetic violence, so bear that in mind if you want to actually watch it.

Everyone in the church goes nuts, but because Harry Hart is a highly-trained secret agent, he kills somewhere around 40 people all on his own.

Matt Henry bowled short. Jonny shot him in the gut.

Trent Boult bowled length. Jonny impaled him with a wooden pole and then shot him in the face.

Michael Bracewell pitched one outside off. Jonny set fire to his head.

For whatever reason, the part of the mind that asks you whether you’re sure you’re doing the right thing was switched off during the tea break and from that moment on Bairstow just got on with the simple reflex job of hitting the ball/murdering people.

The soundtrack to the church scene is the guitar solo from Lynyrd Skynyrd’s Free Bird. A fun game that you’re now too old to play is to listen to that solo and try and guess when it’s about to end. If you’ve only heard it once or twice before, you will be wrong dozens of times. It’s the rock guitar solo version of the climax of Dudley Moore’s Beethoven sonata parody, which has well over a minute of ‘ending’.

There’s a lot of casting off of shackles in the headlines about England’s win. Writing in the Telegraph, Michael Vaughan has lauded Ben Stokes and Brendon McCullum for ‘ripping’ them off.

“It is the same team, more or less, but they have been freed up and it has totally changed their psychology,” says Vaughan.

It sounds such a simple instruction: “Shackles are bad, mmkay. Cast them off, mmkay.” But it really isn’t simple at all. As an illustration of the potential response the players are up against, it was only a week ago that Vaughan deemed a Jonny Bairstow dismissal “dumb” and “pathetic” when he was out trying to drive Kyle Jamieson.

“You can have all the preparation and team meetings, but until you play smart… See him off. Get rid of him. Play a defensive shot. It is just dumb,” he said.

This is not meant to highlight hypocrisy on Vaughan’s part. He’s probably right. That was a dumb shot from Bairstow. And this was a fantastic, liberated, freewheeling innings. Vaughan is calling it as he sees it, but England are viewing things differently because they want to steer Bairstow towards what they think will be a more effective approach overall.

McCullum’s philosophy is not really about throwing off the shackles, so much as it’s about not second-guessing yourself. Sometimes your first guess is wrong, but England’s new coach believes that second guesses can be wrong too and that being caught between two guesses will inevitably be wronger still. So the instruction is just go with what you think is right, be decisive, and we’ll back that overarching approach and forgive specific errors.

That is actually not an easy message to convey. As we’ve said before, you can tell a batter to play freely, but he’s not necessarily going to buy that unless you can somehow show him that it’s what you really want.

To resort to cliché, talk is hugely affordable and actions are more audible than words. It’s hard to properly assess the actions of New England at this early juncture, but a common theme is a broad expression of faith in some players, which by extension becomes a similar message to everyone else in the team.

In marked contrast to the previous regime’s management of Jack Leach, Stokes has often been at pains to say how much he wants someone around. He definitely wanted James Anderson and Stuart Broad to be available for selection, for example. He definitely wanted Ollie Pope in the side too, no matter where there was an opening – even if it was at number three where Pope had never batted before. McCullum has also sounded out Moeen Ali to see if he was willing to unretire.

Crucially, they’re not saying they need these players because saying that would undermine other squad members. They’re saying they want them. Bairstow may well reason that if Stokes so desperately wants Pope in the side that he’ll bat him out of position, he must want Bairstow in the side even more. That must be a bit of a boost.

One day, “You’re all great! You’re all amazing!” might start to wear thin, but for now England players feel like the coach and captain have faith in them.

That’s also why you hear these coded non-criticisms like ‘the intent was right’ when a player gets out to a shit shot. It’s not a cop out. It’s a way of saying the batter made the wrong choice but in the right way. The aim is to be supportive of the approach in the belief that this will result in better returns for the team in the long run.

Reacting to the criticism of Bairstow’s dismissal last week, Stuart Broad said, “he could be happy that he committed to a certain way of playing and didn’t alter that.”

You could say the same about this knock.

We only have time to write these longer pieces because of the collective contribution of our Patreon backers. Patreonage starts at £1 a month, but you can cancel any time, so we suppose it starts at £1. Full details here.