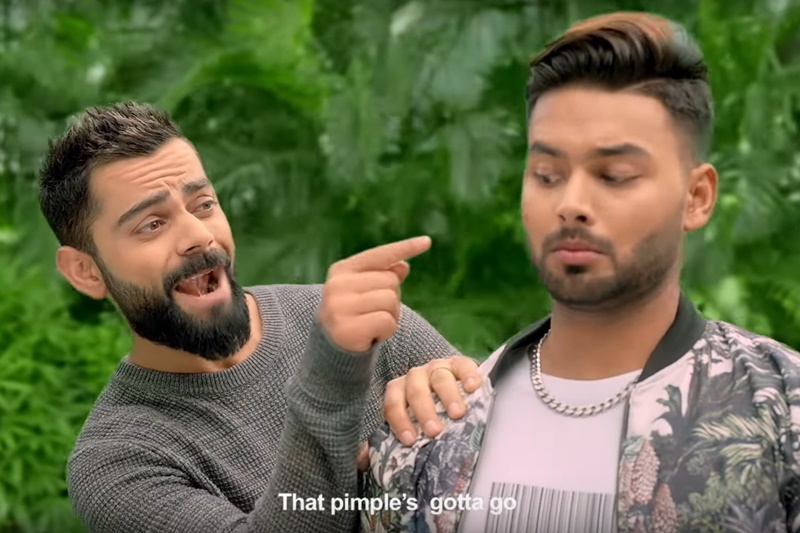 It’s hard not to feel that the role of ‘ambassador’ has been somewhat devalued in recent years by the marketing industry.

It used to be a high-ranking diplomat. But now…

“I am very excited to be a part of Team Himalaya and be the ambassador for their Men’s Face Wash range,” said Virat Kohli about his involvement in this quite magnificent ad alongside Rishabh Pant.

When we wrote about what it’s like to be Virat Kohli a couple of years back, we highlighted how Indian notions of coolness had evolved rapidly in recent years; how previously a cool person was just someone wearing a leather jacket and a pair of sunglasses on a motorbike whereas now it’s something a little more refined.

This ad is maybe a sign that the nation is still capable of the occasional false step.

As everyone knows, the definitive manual for coolness was produced by Marzipan in Kiri and Lou.

“Don’t be silly or pretend. Don’t fall about. Don’t sing and shout. Don’t play the fool.”

To Marzipan’s instructions we’ll add this: Under no circumstances make reference to, ‘walking like a dude, feeling all cool’.

Now, ‘Dude’ – that’s a name no one would self-apply where we come from. You might argue that Virat’s referring to “you” when he says that, but it definitely feels like the kind of “you” where he actually means himself.

So, all-in-all, a dreadful and incredibly fun ad. But before you get too great a superiority complex from laughing at it, we need to knock you down a peg or two.

It’s horrible, isn’t it? Whatever it is you’re imagining, they’re guaranteed to say it so massively, irresponsibly, unrecognisably wrong, that it’s almost beyond offensive.

Now watch this ad again and ponder just how wrong you’ve been pronouncing “Himalaya” for your entire life.