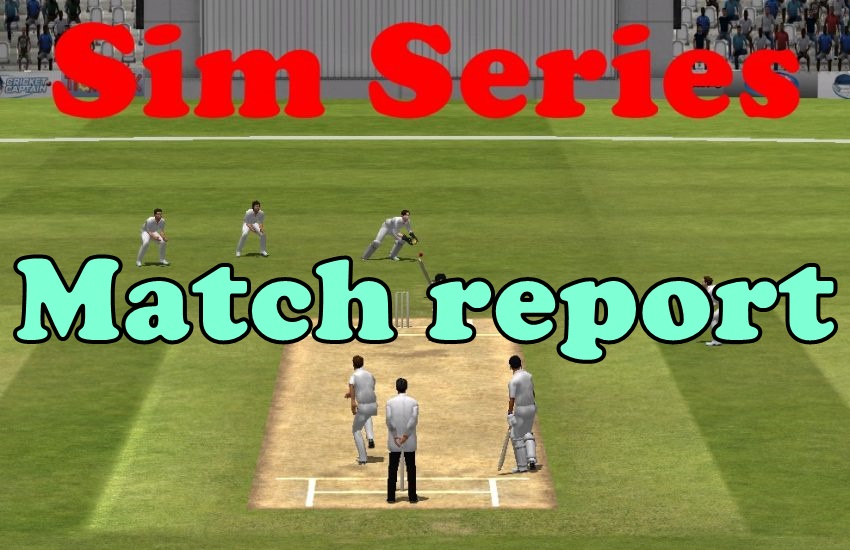 Having been able to garner premium ‘working from home’ tickets to every single day of the entire Sim Test Series between Sri Lanka and England, you can imagine my trepidation that I might actually get to see some virtual cricket after all – the viewing of which would obviously prevent me from submitting a match day report.

I need not have worried. As I took my virtual seat alongside King Cricket and the gang just ahead of the start of play on the morning of the first day of the first Test, my nerves were somewhat settled to see all the usual suspects were virtually there – and all, without fail, observing the social norms around social distancing.

KC was of course holding court, as is his right, looking a little nonplussed at my suggestion that the next Sim Series feature a ball-by-ball account across all five tests. His choice of dress – full cycling regalia – was unusual for what promised to be a marathon endeavour across ten days, with little time or opportunity to change – but who were we mere mortals to question his judgement, let alone his sartorial choices?

The main topic of the morning session, every day, was, of course, what splendours awaited us from Ged and Daisy’s virtual picnic basket for lunch. We were remarkably abstemious during these morning sessions, mainly because it is not the done thing to be a virtual lush before noon (GMT) when ‘working from home’.

We were not disappointed when the time came for lunch. We had each of us cleverly reserved a spot behind our respective couches by laying out a tartan blanket. To list the various delicacies enjoyed vicariously from the deep stores of Ged and Daisy’s basket – smorgasbasket, more like it – day by day would be to rub in it the noses of those who were not there virtually. Suffice to say that a daily highlight was Ged’s Lord’s throdkin, of which he boasted he had ten variations – one for each day of the proposed series. The recipes for these did not disappoint. Although in the end, sadly, we only got as far as variation number eight.

Things picked up in the afternoon session each day. Throdkin doth produce both a thirst and a desire to hold forth in Shakespearian dialogue. Corks were popped, littering the virtual outfield. Wine was imbibed. Talk was cheap. Or maybe it was cheap wine that was imbibed, with no talk at all. Who knows?

By the evening session on each day, we were all a bit loose, to say the least. The wine having long since been depleted, we had moved on to pints of whateveryourehavingyourself. Inevitably, beer snakes ensued, and at least three of us were reprimanded and given last warnings by the virtual stewards who had suddenly materialised in our sitting rooms.

Thankfully, KC was able to immediately pardon both the reprimands and the warnings, a show of benevolence and fair-mindedness which would have been all the more sobering were it not for the sight of KC dispensing said pardons standing on his seat in a pair of cycling shorts and a cardboard crown fashioned out of the packaging of a six-pack. It’s fair to say KC was a bit squiffy by this time, and was more than liberally dispensing honorariums pretty much willy-nilly to all and sundry.

Things deteriorated after that. All and Sundry had packed up and left with their titles. Somebody dissed Tendulkar.

Remarkably, every day virtually went like that. Thankfully, at the end of each day’s play, we didn’t have to worry how each of us would get home in the state we were virtually in. We were already home, socially distant, full of throdkin and wine, good company and cheer. I mean, beer.