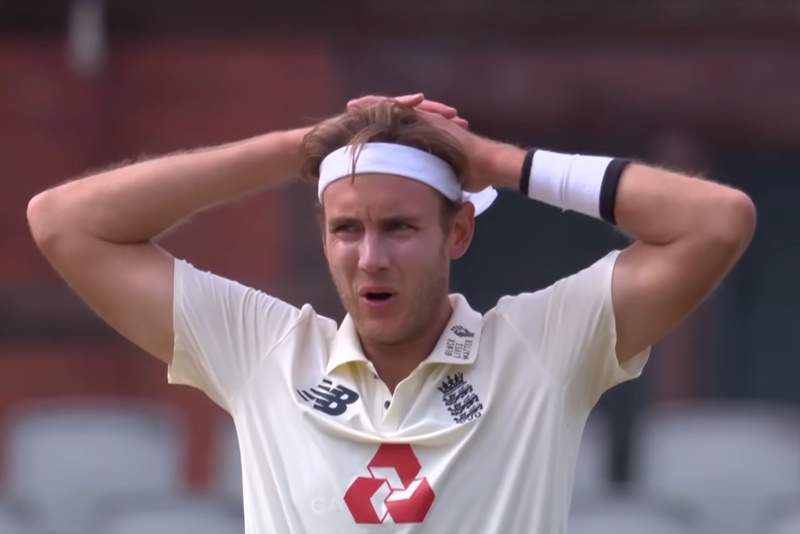 There are two types of people in this world. There are annoying people and then there are people who pride themselves on being annoying.

That’s it. Those are all the options. Everyone is annoying.

Probably the most annoying person ever is Ben Kingsley’s insanely aggressive character in Sexy Beast, Don Logan. (Here’s a highly sweary video that gives you just a taste of what he’s like.)

Logan is a man who very literally will not take no for an answer.

Sexy Beast is striking and memorable and funny, but it’s probably not a film you’ll want to watch again any time soon, specifically because of how transcendentally infuriating Don Logan is.

Logan can’t help but be annoying. He takes no pleasure in it. It’s just the way he’s wired.

Stuart Broad, on the other hand…

Broad strikes us as a man who doesn’t merely pride himself on being annoying, but perhaps even actively works on it, honing his art to attain higher peaks and greater consistency.

Put it this way: if we suggested that Broad actually delights in annoying people, how many of you would disagree with that statement?

There was that famous time in the 2013 Ashes when he didn’t walk after nicking the ball behind (to first slip, via the keeper). That was effortlessly annoying, but consider what it gave rise to.

Come the next Ashes series, Australia’s Courier-Mail refused to name him, and instead spent the first Test referring to him as a ’27-year-old medium-pace bowler’. After taking five wickets on day one, Broad swanned into the press conference with a copy of the Courier-Mail under his arm.

Exhibit B would be when he volunteered to do a press conference after the sandpaper story broke so that he could innocently make a point about how much Australia had got the ball to reverse in the Ashes.

“I saw Steve Smith in his press conference say it’s the first time they’ve tried it, which to me seems really surprising they’ve changed a method that’s been working.”

Broad loves all this stuff.

But really these off-field examples are just proof of his gleeful malevolence; signs that a certain proportion of his far more significant annoying on-field work must surely be cold and deliberate.

A lot of cricketers are annoying because they play for your team and they do things wrong. Broad has been this kind of player plenty of times – perhaps most memorably when he managed to miss three run-outs and drop a catch in the final over of a World T20 defeat against the Netherlands – but it’s as an opposition player that he truly excels. That’s when you really want to lamp him in the mush.

Ask any cricket fan from outside England to name the most annoying cricketer in the world and there’s a good chance Broad’s name will come up. It’s a compliment really. You’re rarely bothered by opponents when they’re rubbish.

Except with Broad it’s not that he’s annoying because he’s good, it’s that he actually seems to have made ‘being annoying’ a crucial element of why he’s good.

Shane Warne was a bowler cut from similar cloth. The first LBW appeal was close, the second was closer and the third one… “Come on, umpire. Come on. If that last one was nearly out then this one has to be out. Has to be, has to be, has to be. Howzat!”

Where Warne tried to convince umpires with his certainty, Broad hoodwinks them with his complete and utter conviction. If he didn’t invent the celebrappeal – the appeal that is actually just a celebration – then he is certainly its best known practitioner.

This one against the West Indies was incredible.

Broad’s ‘appeal’ involved running down the pitch and punching the air without looking back.

To be clear, this was for an LBW. We’ve seen clean bowled celebrated with less certainty. What do you do if you’re the umpire in that situation? You might as well give it. The batsman can always review.

People hate Broad for this. And the genius of Broad is that he loves that people hate him for it, seemingly gaining more from the transaction than his haters lose. He draws energy from their antipathy, like how Superman draws energy from Earth’s yellow sun.

You can get our articles by email, if you want.