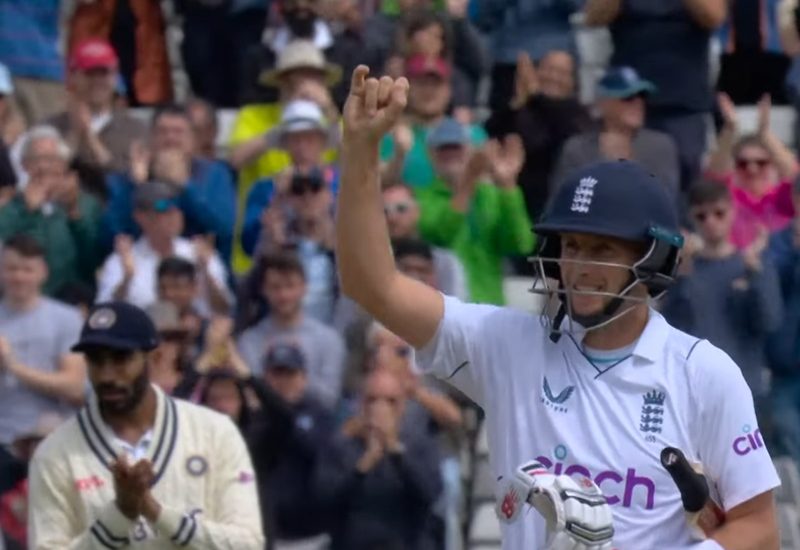 “It’s a game of failure, batting,” said Joe Root five minutes after this Test finished. The statement was on the one hand very sage and on the other just plain wrong.

Four times in a row England have chased a lot of runs to win. This would be remarkable even if they hadn’t gone into this summer having spent several years being just about the collapsiest team in Test history.

Set in that context, this run of matches seems about as predictable as Twin Peaks: The Return. (Oh look, the doppelganger’s awake. Oh look, it’s Nine Inch Nails. Oh look, the first detonation of an atomic bomb. Oh look, a humanoid form floating in the void spewing a stream of primordial fluid. “Got a light?”)

In actual fact, the most unpredictable development has been what has now become predictable.

Our nerves would normally surge as the batters neared their target. Today? Not so much. Normally, as the prospect of victory increases we get nervier and nervier about the growing volume of good work that could be thrown away. Today every boundary made us calmer.

It’s a dramatic shift in attitude on our part. The players may well feel similarly. That would certainly help get the most out of them.

Getting the most out of them

Here are three lines from a piece we wrote about England’s failed 2015 World Cup campaign, each of which seems a weirdly good description of how Ben Stokes is trying to shape the Test team alongside Brendon McCullum.

If you listen to interviews with England’s captain, you will repeatedly hear him alluding to each of these three principles.

Always striving for victory, no matter what the match situation, isn’t so much about blind positivity. It’s more about recognising that clear-mindedness is vital. And if you have to sacrifice a bit of wider sense and reason to ensure that ball-by-ball clarity, then so be it.

A mentality of trying to win games and not countenancing any other option may sound moronically simplistic, but it keeps players clear-headed and wards away the kind of second-guessing that so often results in getting out.

It helps ensure conviction. Stokes’ recent batting has been a bonkers attempt to instil the same thing in his team. “Don’t worry about making bad decisions, lads,” he is saying as he sashays down the pitch and bazzes wildly. “Just make sure you follow through with whatever you decide. Don’t get caught in two minds. I promise I won’t bollock you. I can’t really because just look at this mad shit that I’m trying.”

England haven’t found better players, but they do seem to be minimising that doubt and in-the-moment self-questioning that hampers performance. (Reflecting on your decisions later is a different thing.)

‘Don’t wonder what people think you should be doing’ is the message. ‘Just choose your shots and play them with conviction.’

Elsewhere in that 2015 World Cup piece we said: “Practice makes perfect and the more times you’ve done something, the more confident you will be that you can perform the task in question.” This seems a fair summary of how England approached this latest run chase. It was unquestionably built on the three smaller ones that preceded it.

The best way to chase huge targets is to practise doing so. And you can only ever do that if you make those attempts in the first place. It’s all very ‘let’s see what we can do’.

Chasing 378 is a big ask, but it seems an entirely credible prospect when you made 296-3 to win the previous game. And that previous chase only really seemed credible after making 299-5 to win the game before that. That in turn seemed reasonable after England had made 279-5 to win the first Test of the summer.

If Jonny Bairstow has shifted his team-mates’ perceptions, it’s only because he’s been ambitious and had a go in the first place. That gave him a chance and having a go with conviction gave him a better chance.

Now for the counterpoint.

One: While Jasprit Bumrah and Mohammed Shami are fantastic bowlers, India are not that long in the country and aren’t running as hot as they can. Some of the support cast in particular looked a step or two adrift from where they were last year.

Two: It’s shaping up as a good summer to be a middle-order batter. Whether that’s something to do with this season’s Dukes balls, we don’t know, but we’ve seen it in every Test – and not just from England. Daryl Mitchell and Tom Blundell made an extraordinary number of runs for New Zealand batting at five, six and seven. Rishabh Pant and Ravindra Jadeja made hundreds in this Test.

This doesn’t negate England’s recent achievements with the bat, but perhaps it contextualises them a little. Maybe the revolution has had a little bit of a tailwind.

Does that mean this isn’t sustainable? Chasing near enough 400 to win in the fourth innings probably isn’t, but the mentality of always making the attempt might be. And if the unequivocal nature of that modus operandi helps simplify the players’ approach then that’s probably a net gain.