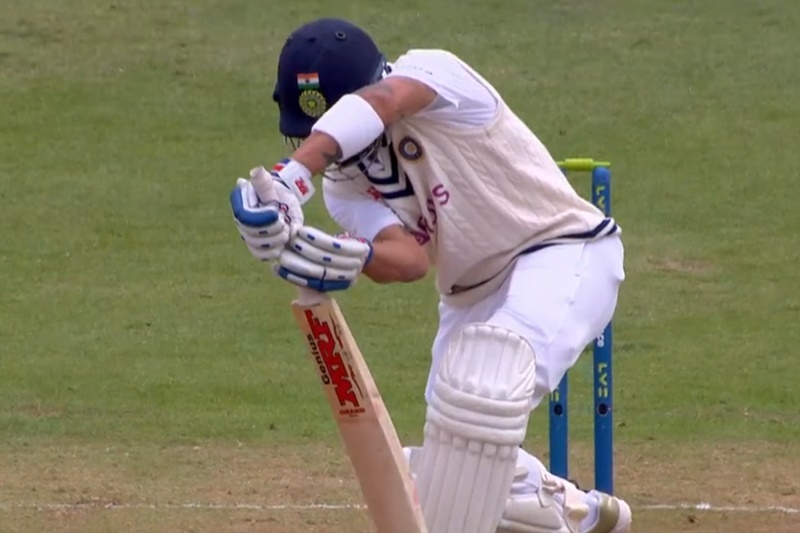 James Anderson took two wickets in his 11th over of the first Test: Cheteshwar Pujara for 4 and Virat Kohli for 0. Both are great and significant batsmen and if our maths is correct – and no guarantees on this one, people – there is only a four-run difference between those two scores. Yet the two wickets were celebrated rather differently.

We know what you’re immediately thinking. You’re thinking this is a Virat Kohli thing. And to a great extent, you’re correct.

Virat Kohli is a very passionate cricketer. He is also a man who is not averse to a bit of friction with the opposition. Throw in the fact that he’s India’s captain and the upshot is that bowlers tend to experience just a little bit more joy when they dismiss him.

But it is not just that. Because these reactions are VERY different.

Here’s Jimmy Anderson after he got Pujara out.

You’re wondering if we’ve got the right moment there, but honestly, we have.

Jimmy Anderson celebrated dismissing India’s number three by looking like a man who’s just walked out of his house and closed his front door behind him only to immediately wonder, “Wait, did I actually remember to pick up my keys?”

That is quite a weird wicket celebration and definitely not a big one.

Now here’s Anderson after he got Kohli out.

So basically almost in tears, wailing with delight.

It was really full-on. In fact it’s worth including another shot from quarter of a second later to underline that.

‘Why God, why? Why have you blessed me with this unbearable level of emotion?’

To be completely clear, this happened exactly one ball and around two minutes later.

What’s the most significant element underpinning this contrast?

For sure, it’s all of them (and it’s interesting to think about what that says about Pujara), but context is the one we haven’t yet mentioned.

A wicket is always a surprise. It is a jolt of adrenaline for the bowler that takes them from weary to elated in an instant. But there is only so far you can go.

Okay, Jimmy only went from grumpy-weary to, placid-weary for the Pujara wicket and that is not much of a leap at all, but we’re pretty sure it would not be possible for a man of his age and seen-it-all-beforeness to go from grumpy-weary to quasi-religious delirium in the space of one delivery.

To get that second state, he needed a teaser. Pujara was that teaser.

With his senses heightened and a few beats-per-minute added to his heart-rate, Jimmy experienced a near-immediate supplementary jolt with the Kohli dismissal. He was primed this time and the impact was therefore enormous.

This is why what precedes a wicket is so important.

This is why hat-tricks are so great.

This wasn’t even a hat-trick. But it was Virat Kohli.

Get King Cricket as an email.