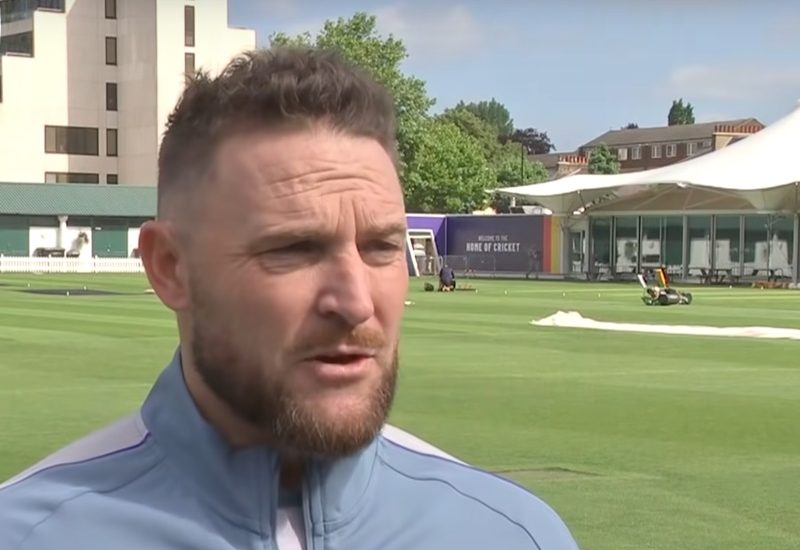 Has any man credited with such great influence over two teams ever had less direct influence on either?

Brendon McCullum undoubtedly laid foundations for the current New Zealand side. Just as Nasser Hussain added vertebrae to England between 1999 and 2003 before they delivered higher profile successes, McCullum set the Kiwis on a path to being habitual finalists in multiple formats.

But at the same time, he did retire in 2016 (after an unbroken run of 101 consecutive Test matches). That’s a fair while ago. No matter how big the splash he made as captain, by this point the contemporary team is only being buffeted by small ripples.

Meanwhile, his influence on England hasn’t really begun. He doesn’t know most of the players. He’s taken a back seat on selection. He hasn’t yet been coach for a single match.

In both cases, McCullum’s contribution is really not much more than vibes. (More Bez than Baz as Ali Martin put it – which is a great joke if you’re of the correct age and cultural background to instantly get it.)

So despite his name appearing twice in the headline, let’s not talk about Brendon McCullum. Let’s take a look at some of the other likely first Test talking points instead.

Ian Bell and Jonathan Trott used to bat at three and four for Warwickshire and at four and three for England. Almost as if he’s wilfully spurning the relentless comparisons with Bell, Surrey’s number four, Ollie Pope, has just taken on the Trott role.

There are worse people to try and copy. Trott is arguably the kind of cricketer England have most been in need of this last however many years.

Does Pope have it in him to be a Trott though? That kind of pared-back minimalist approach surely diminishes the very qualities that make Pope the batter he is? Or perhaps batting at three will drag him from his pigeonhole and encourage him to take a few steps in that direction. Maybe that short walk will land him in the kind of risk/reward sweet spot so beloved of Joe Root.

In January, Luteru Ross Poutoa Lote Taylor played the last of his 112 Tests. The tourists have become an excellent side in recent years, but surely not one that can easily replace a man who averaged 44.66 while playing half his cricket in New Zealand and who still scored hundreds even when he couldn’t actually see very well.

Taylor’s legacy is still a little hard to put into words, but as Trott has shown us, sometimes it’s the games you don’t play that clarify matters.

Taylor’s replacement at four is not really his replacement however. Henry Nicholls, averaging 40, has simply moved up a spot. That means his absence will more likely be felt elsewhere.

Daryl Mitchell has made a solid start to his Test career and could bat at five. Or New Zealand could instead retain the top order they’ve used when Lord Megachief of Gold has been unavailable (Tom Latham, Will Young and Devon Conway) and shunt Nicholls back down to five.

Young would be the beneficiary in that scenario, which leads us into a digression about his namesake and the most jarring cultural shock we’ve ever experienced.

We were in India during the winter months of 2001 and 2002. This was a pretty big culture shock in itself, but somehow it was less than what we experienced upon our return. The first series of Pop Idol was broadcast on UK TV during this period you see, and when we came back normal human beings were having conversations about “Will” and “Gareth” and these people DID NOT HAVE SECOND NAMES.

If you’re wondering when British popular culture went completely and irreversibly shit – this was when it happened. We were away. We missed it. Before that everything was kind of okay and afterwards everything was forever slightly wrong.

It was like going into space and returning to Planet of the Apes. We’ll try not to hold any of this against Will Young the New Zealand opening batter, but we can’t promise anything.

We’ve discussed this in the comments already, but England’s latest seam bowler appears to be getting his -y suffix in early. Maybe by applying it to his first name he’s shooting for a mononym like Gareth or Will.

Our favourite Matt Potts story so far is the one recounted on the BBC website where he apparently mistook ‘getting picked for a cricket team’ with ‘being sent to a maximum security prison’.

Take on the biggest, scariest prisoner on day one and no-one will mess you again, they always say in terrible films. “I am going to fight everyone in the changing room and I’m going to start with you,” Potts apparently informed the largest of his Washington team-mates when he was 15.

It’s a slightly odd approach and a precedent Craig Overton may have in the back of his mind ahead of Potts’ Test debut – especially as he appears to have grown.

And just how big is Potts? That’s the main question floating around our mind right now. Rob Key called him “a point of difference” and when you’re a right-arm seam bowler, that can only really mean one of two things: either you’re fast or you’re ludicrously tall.

So surely that means he must be massive? Except we haven’t actually seen his exact height mentioned anywhere and very tall bowlers ALWAYS have their exact height mentioned when they come into a side because that’s their most obviously important quality. (Steven Finn used to tell people he was 6ft7in even though he’s 6ft8in because he thought that extra inch was “embarrassing”.)

So now we’re back to pace again. Do people secretly think that Potts might actually be 90mph+ and that he just hasn’t been clocked recently?

Jack Leach has a strong claim to be considered England’s most dicked-about player in recent times, then he finally got a bit of a run in the side in the West Indies and performed pretty well.

Good, good… except now the previous owner of that title might be making a comeback.

Moeen Ali retired from Test cricket last September, but reportedly told McCullum this week that he’d be open to a comeback. Adil Rashid’s name has cropped up as well – although it sounds like he’d only ever come into the reckoning as a second spinner.

What does this mean for Leach? It means that he should do what he can, when he can, and anything beyond that is out of his hands.

Same as it ever was.

When New Zealand last toured England way, way back in 2021, Kyle Jamieson sat out the second Test to conserve his strength for the World Test Championship final. This seemed to work out okay as he basically won that match for New Zealand – but it does mean England have seen very little of him.

At 6ft8in tall and not much less than that across, Kyle Jamieson is a very slightly frightening point of difference.

King Cricket is a fan-funded website. While all our content is free for everyone, some of our readers voluntarily chip in varying amounts to help keep the lights on. You can find out more here.

Or just sign up for the email (also free).