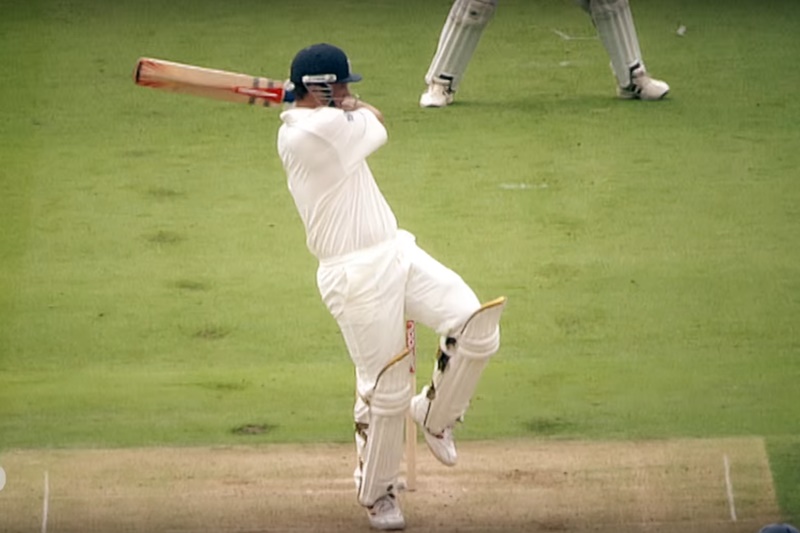 When we think about some of the decidedly non-newsworthy Rob Key related things we have reported on down the years, it is pretty clear to us that we will have to say something about him becoming the managing director of England men’s cricket too.

To give a handful of largely-picked-at-random examples, there was…

So, in short, we do not really have any kind of editorial threshold for whether or not we write about Rob Key. Something happens involving Rob Key. We write about. That is pretty much how it goes.

In fact quite often we don’t even need anything quite so STOP THE PRESS as a car number plate sighting. We’ve previously published a Rob Key themed cryptic crossword and countless incredible works of art. Most memorably of all, we once spent an entire week building up to publishing a GIF of him. (A course of action that we still feel was entirely justified, by the way.)

We have also been known to write occasional pieces about his cricket, like when we included him in The Realm’s England XI or the big retirement piece we did for Cricinfo which sort of explains how we latched onto him in the first place.

So now he’s managing director of England men’s cricket and while part of us feels the lack of a lower editorial threshold for writing about Key doesn’t necessarily rule out an upper threshold, we’ve decided to make the effort.

The issue here is that there is a fundamental conflict. If we were a computer, we’d be showing some sort of indecipherable error message right now and you’d be switching us off and on again.

It is in fact a rare occasion when the ‘angry or amazed?‘ rating system actually fits quite well. Our editorial position on Rob Key has always been amazement, while our editorial position on the managing director of England men’s cricket has generally been anger. Quite how we will report on Rob’s strategic decision-making is a real quandary.

We once interviewed Paul Downton, who held a similar but slightly larger role at the ECB for just over a year leading up to the 2015 World Cup. We spoke to him before he returned to cricket, at a time when several relatively young county players had just sacked off the sport in favour of a career in the City. (Downton was a stockbroker at the time.)

He seemed a lovely guy, but the interview was defined by a chronic culture clash where he kept telling us that it was hard for these fellas to turn down these kinds of opportunities and we repeatedly failed to comprehend what he was saying because for us being a cricketer, and potentially an England cricketer, seemed like the greatest opportunity a person could ever have.

That mini anecdote undoubtedly says more about us than Downton. It is also worth pointing out that he is not some money-hungry caricature because he subsequently returned to the game and is in fact Kent’s director of cricket right now.

But Key’s attitude to cricket seems a lot closer to ours.

Will he be any good?

We are broadly in favour of Rob Key’s appointment. You may feel that long years of complete unquestioning hero worship make our view on this matter worthless. You would be entirely correct, but we’re going to outline some of our selective reasoning anyway.

First and foremost, Key has always come across as a clear thinker; a man who can identify and describe a problem and then suggest a logical way of tackling it without at any point descending into corporate bollocks.

That last part is quite handy in an organisation like the ECB where so many seem to get subsumed by corporate culture, mouthing banal positivity while simultaneously making poor decisions.

And Key will definitely make decisions. One of the reasons he will be such a great loss to pod- and vodcasting is his irrepressible urge to steer conversations towards topics he has strong feelings about. There are few elements of English cricket on which he won’t have an opinion. He has little time for half-heartedness, self-interest or tradition if he feels they’re compromising the national sides.

Key is a good guy too. People we have spoken to at Kent are more than effusive in their praise of a man who took on far, far more than the average county captain at a time when the club was on its uppers. He did that to the detriment of his own international prospects (“It took 15 years off my life, 10 runs off my average and 5,000 off my total of first-class runs,” he told The Cricketer) – but he did it anyway.

That speaks of a sense of loyalty and duty, because it wasn’t a job he necessarily always relished. To his great relief, James Tredwell took over one year – only to return the job to Key at the end of the season. “I couldn’t give it away in the end.”

Key very definitely loves cricket and he very definitely wants England to do well. He also seems fuelled by dissatisfaction. That’s how he’s wound up abandoning a brilliant job at Sky Sports to take on one where he’s going to face more than his fair share of frustrations and abuse. Director of England men’s cricket is a job where even most of the people who wanted to apply subsequently unapplied after speaking to the ECB about it.

Key is thick-skinned though (as well as big boned) and unafraid of an argument. Indeed another of the defining qualities of his punditry is his willingness to dive headlong into animated disagreement with his higher profile colleagues.

This is a big job, but maybe not one that has as much day-to-day clout as people think. A lot of the most important work will be done early with the appointment of new head coaches and a Test captain. Assuming it does turn out to be multiple coaches, the big challenge will then become managing the tensions between these parallel England setups and their potentially destructive desires to tap into the same resources.

That doesn’t seem a whole lot of fun. This new man must really give a shit.

If you’re a fan of cricket websites of wildly erratic tone, sign up for the King Cricket email. This is what our latest definitely-not-fictional subscriber has to say about it…